Pro starts to walk in putt — when gusts blow it 25 feet (!) in the other direction 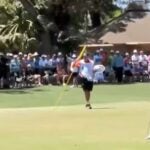 Kevin Kisner on Friday on the 1st green at Harbour Town Golf Links.

The RBC Heritage was windy on Friday. But don’t take just our word for it.

“Tough,” Shane Lowry said. “It was — yeah, it was tough out there. It’s so hard in the trees, and the wind’s swirling. It’s quite a strong wind as well.”

“Yeah, we knew it was going to be really challenging just hitting balls, you know whatever it was, 20 mph winds gusting, maybe a little higher at times,” Jordan Spieth said. “And it’s just really tricky around this place because sometimes down around the trees you either don’t feel anything or you feel the opposite.”

“So when you get in the trees and the houses, actually you’ll feel completely different on the tee than where your ball’s at,” Joel Dahmen said. “It’s really hard to actually just hit a golf shot when the wind is going one way and you’re standing the tee, and the ball is going to do something completely different up there. So that was really difficult for me.”

Swirling, strong, challenging, tricky, hard, difficult. The wind at Harbour Town Golf Links was all of the above. And the 30-mph gusts were this, too:

“It was a crazy day,” second-round leader Patrick Cantlay said on Golf Channel afterward. “I mean, Kisner had a putt on the 1st hole that was about a foot from the hole and actually going towards the hole and then a gust blew it 30 feet off the green.”

Believe it. On the par-4 1st, after hitting his birdie putt from 15 feet away, Kisner hit his par putt from 25 feet away — 10 feet behind the first putt — after the wind gust.

A video posted by Twitter user @tbellucco8 shows more. Kisner, one of the better putters on tour statistically, began to walk the birdie putt in when he froze as the wind kicked up and the ball blew backward. Fans moaned. Playing partner Billy Horschel raised both of his hands in the air.

From there, Kisner two-putted, shot a three-over 74 — and missed the cut by a stroke.

“So that was just the kind of day it was today,” Cantlay said.