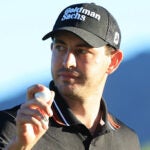 Patrick Cantlay leads the American Express through one round.

Of late, Patrick Cantlay’s dates with the media have gotten increasingly more interesting. That is, in part, due to the fact that he’s been making golf look easy. Very easy, even. Take his last four public appearances as evidence:

At the BMW Championship he outdueled Bryson DeChambeau down the stretch, pouring in clutch putts and picking up a nickname — “Patty Ice” — in the process.

At the Tour Championship he held off World No. 1 Jon Rahm by a single shot to take home the year’s top prize, a $15 million check from the good folks at FedEx.

At the Ryder Cup he showed up as a rookie but dazzled anyway, embracing the crowd, going 3-0-1 and emerging an unexpected hero for the U.S. side.

Then he disappeared for a while. Cantlay didn’t play a single Tour event in the fall. He didn’t even rally for the Hero World Challenge, where they basically hand out world ranking points at hotel check-in, despite it being just a short trip from Cantlay’s home in Jupiter, Fla.

But the layoff didn’t seem to faze him. Golf looked even easier, if possible, when Cantlay emerged “rusty” from his competitive hiatus and shot 66-67-66-67 at Kapalua. That 26-under total somehow finished just fourth thanks to the record-setting scores ahead of him, including Cameron Smith’s Tour-record week of 34 under. The scoring fiesta set off a debate about whether golf is “too easy.”

That’s a long preamble to tell you that Cantlay is back in action at this week’s American Express, and he brought his golf game to the desert — and some insights, too.

First, the golf game: Cantlay ripped off eight birdies and an eagle to rocket to 10 under par through 13 holes on Thursday. He parred his final five holes for a ho-hum 62 to share the first-round lead.

The insights actually came from his pre-tournament press conference, but they seemed particularly prescient after his first-round birdie bonanza. Asked about last year’s American Express, in which Cantlay shot 126 on the weekend but came up just short, he was reflective.

“I think that if you ask professional golfers, I would say at times the game feels really, really easy, and if you would have asked me Thursday, Friday last year playing the tournament, it felt hard, and then something clicked Saturday-Sunday and it felt really easy. If you could tell me why that is, I would be better.”

Cantlay is at his best when he is boiling down complex phenomena to extremely simple statements. Perhaps that’s because he hates wasting words. He may think I’ve already wasted about 100 by this point in the article, but here we are. A reporter asked Cantlay to expand on the idea that golf can be too easy on Tour. He clarified:

“I didn’t say too easy. I said at times professional golfers can make it feel very easy and I’m sure, even, what’s your handicap?”

“Never mind,” said the reporter. “It’s never too easy for me.”

“But some days it feels relatively easy and sometimes it feels a lot harder and that’s just the game.”

In other words, Cantlay believes that the defenses of golf are enough. He added that under certain specific conditions, like those in Maui — “There was no wind and usually it’s 20 miles an hour, and it had a rained I think like 10 or 11 inches the week before,” he said — pros’ scores will inevitably plunge.

But that doesn’t mean Cantlay believes golf is immune forever to the effects of progress. Asked if he thinks the ball goes too far, Cantlay referenced a 1987 New York Times article about PGA West in which players complained that it was too extreme and threatened not to return.

“Well I saw the article that said that the guys came here and played in ’87 and it was so hard that they boycotted and said they would never come back, and obviously that’s not the case for this golf course anymore,” Cantlay said. What followed was as concise an explanation of the distance debate as you’ll hear.

“I think the biggest concern as far as the golf ball is exactly that. To keep a golf course relevant or very, very difficult, you have to keep getting a bigger, harder golf course, just to combat that.

“So just judging off all the places we played, I imagine when they built the place in ’87 or they must have built it before that, obviously, in the ’80s, but they could have never imagined me shooting 61 on the golf course because you just couldn’t do it. You couldn’t probably hit the golf ball far enough, drive it in some of the places that I did and have wedges into some holes that I did.

“So that seems to me the biggest concern as far as distance and golf ball is, to keep a golf course relevant, so the tees don’t have to go back, back, back, all the time.”

That doesn’t place Cantlay in the hot-take zone on either side of the distance debate. But it reminds us that he has a fundamentally solid understanding of the hot-button issues of the golf world.

That’s not easy, no matter how he makes it look.