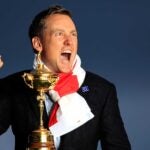 Poults is many things, but he is nothing if not a thorn in the side of American Ryder Cup fans everywhere.

What is it about this guy?

Other players in plaid—Arnold Palmer in his day, Darren Clarke in his, Rodney Dangerfield for 100 minutes—it works. It’s cool. Ian Poulter in plaid is annoying.

Ian Poulter in anything is annoying. It’s a backdoor compliment.

Here’s the starting point: He’s been a constant in our golf-watching lives for about 20 years now, at all our sparkly events, most especially the Ryder Cup. If he weren’t good, would we care so much about him? We would not.

He’s spectacularly English. The working Englishman who made it. He’s as Jaguar C-Type as Pat Reed is Ford F-150. We don’t do Jaguars, here in these United States. Ian Poulter don’t care.

Poulter earned his PGA Tour playing privileges by making the 2004 European Ryder Cup team. (He’s been playing both the European Tour and the PGA Tour ever since.) Poulter sunk the winning point for his club at the ’04 Ryder Cup. In Detroit—how galling. Hal Sutton, our captain, was so impressed he almost doffed his 10-gallon lid. Poults is more of a visor guy. It’s a British thing. Poults. Tiger put it in circulation. From the Yiddish, for the guy you’d least like to see over a meaningful 10-footer to beat you.

Tiger can’t stand him. Okay, we don’t know that for a fact. Woods is famously tight-lipped about how he feels about any of his contemporaries. Poulter is 45, 13 months younger than Woods, and they both turned pro in 1996. Each has seen plenty of the other. Everyone knows that Tiger speaks through his eyes, his body language, his scorecard and his intra-round playing-partner chitchat, or the lack of it. You of course remember Masters Sunday in 2019, when he won again. Well, his Saturday round set it up, when he played in a twosome with Poulter. Poulter showed up on the first tee wearing lilac pants, as if he didn’t know that Tiger had already reserved the color. (Everybody knew his mock turtleneck schedule.) The nerve! Poulter played a flawless round of golf on that Saturday. Tiger gave him a wide berth and beat him by a shot.

Tiger doesn’t do cheeky, and that’s Poulter’s stock-in-trade. In 2007, he and Woods were both living in Orlando and both playing in the U.S. Open at Oakmont. As Hank Haney tells the story in The Big Miss, Poulter showed up, after inviting himself, at the steps leading to Tiger’s jet on that Sunday night. Tiger’s in-flight text to Haney, per Haney: “Can you believe this d— mooched a ride on my plane?” Well, yes.

Here (with minor editing) is Rickie Fowler, Ryder Cup veteran, on why Poulter is so good at getting under the skin of other players in match-play golf:

“I’m not sure how he does it, but I wish there was a way to figure it out. Those Ryder Cup weeks are special. There’s a lot of passion there, with Poulter. I don’t know how he gets through the whole week, playing at such a high level, considering how much energy he goes through. With each shot he’s hitting, it’s like he’s living and dying. Like it’s his last shot. He grits it out. It’s impressive to watch. I’ve always been a big fan of Poults.”

And that thing is the main point. Depending on the color of your passport, you either do or don’t root for Ian James “Poults” Poulter. But how can you not be drawn to him, watching him as he watches his hole-bound putts with eyeballs practically falling out of his head? Poulter has played in 22 Ryder Cup matches and has lost only six of them. He’s 4-0-1 on his five Ryder Cup Sundays, and he’s been on the winning team four times, twice in the U.S. He won the WGC Match Play event in 2010. He won the European Tour’s match-play event the next year.

Poulter said, years ago, that once he started firing on all cylinders “it will be just me and Tiger.” That never happened. Poults has a giant o-fer in his 65 Grand Slam events. But when Tiger won that 2019 Masters, Poulter was on the receiving line, right by the clubhouse door. He took off his visor and he and the new champion shook hands. Yes, No. 15 for Woods. But who has a better Ryder Cup sizzle reel? Ian Poulter is in the pantheon. Ask anybody. Start with him.