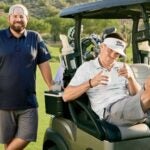 By the time Colt Knost and Drew Stoltz launched their podcast Subpar, they were already good friends. And their good vibes are contagious.

Colt Knost gets a fair amount of attention as he walks up and down the fairways at Tour stops across the country — Tampa Bay, Fort Worth, Charlotte. As he ambles past the masses of sometimes well-lubricated patrons, there’s rarely a golf hole where a fan doesn’t recognize his sturdy build and call out to him.

PGA Tour stars are accustomed to this kind of recognition — it’s in the job description when you become one of the game’s elite players. Although he was, at one point, among the sport’s most promising young golfers, the love Knost is soaking up now comes from his deep, post-playing-career plunge into a media career. The 36-year-old has reinvented himself as a professional talker — an on-course reporter for CBS Sports’ golf coverage and the cohost, with Drew “Sleezy” Stoltz, of both Gravy and the Sleeze, on Sirius XM’s PGA Tour Radio, and GOLF.com’s popular weekly show “Subpar.”

Since launching in February 2020, “Subpar” has become one of golf fans’ favorite places to consume content, via its podcast, social media posts and online videos. The podcast alone garners, on average, 335,000 downloads per month —  more than 3.6 million for the lifetime of the show.

“I think the success has surprised everyone,” Knost says.

The path to sports media has been an unexpected one for Knost and Stoltz. Both were accomplished amateur golfers —  and good friends — in the Dallas/Fort Worth metroplex: Knost at SMU (where, as a senior, he won the 2007 U.S. Amateur) and Stoltz at crosstown rival TCU. Professional golf seemed to be the next logical step. But in a sport where progress is rarely linear and success is impossible to predict, neither reached the heights they’d dreamed of. Knost swung between the Web.com tour and the PGA Tour for over a decade; Stoltz gave it a shot on the development tours. Eventually, both decided to set aside the sticks and embrace the next chapter.

In early 2019, they caught a break. Taylor Zarzour, the director of Sirius XM’s PGA Tour Radio, approached Knost with a proposition. He’d heard Knost was retiring from the pro circuit and wondered if he’d be interested in a shot as a satellite-radio jock.

“I thought, Man, he’d be really good,” Zarzour remembers. “To have someone that connected to the current game was something really appealing to us.”

Knost and his pal Stoltz debuted Gravy and the Sleeze the week of the 2019 Masters. By year’s end, Sirius XM committed to giving them a daily spot on their lineup.

Even before their XM success, Knost and Stoltz were in talks with executives at GOLF.com about a weekly podcast.

“We figured, ‘Why not?!’ ” Knost says. “Everybody loves podcasts these days.”

“We strive to set the industry standard on every platform in which you can consume our content,” says Jason Adel, CEO of GOLF and GOLF.com, “and having the best people is key to that mission. The energy, passion and joy Colt and Drew bring to the ‘Subpar’ set each week—and their unique ability to connect to their guests—makes for some of the most insightful and entertaining conversation going right now in the world of golf.”

In February 2020, Jon Rahm cut the proverbial ribbon as the first “Subpar” guest, and in the sometimes laid-back, sometimes unhinged vibe that has become the trademark of the show, Rahm dropped a few Kendrick Lamar raps on his hosts. They’ve welcomed a who’s who of A-list sports professionals since: Jordan Spieth, Justin Thomas, Tony Romo, Tony Finau, Jason Kidd, Rickie Fowler and Charles Barkley among them.

The duo’s goal is to make their chatty hangs as organic as possible — as if buddies are sitting around and shooting the breeze after playing 18. Theirs just happen to be recorded.

“We want guests to let their hair down, cut loose, crack jokes and tell stories,” says the 37-year-old Stoltz. “We hope the world can see the personality behind these guys.”

As former pros, they have a distinct advantage in pulling off that vision. Knost and Stoltz are already pals with some of their guests, and the built-in rapport gives them loads of leeway to poke fun. A show as successful as “Subpar” would customarily require hours of prep and the careful consideration of questions. Knost and Stoltz don’t even compare notes before the cameras roll. They begin with a loose idea of what they want to talk about, make sure they’re on the same page — and let it rip.

The result is (barely) controlled chaos. Baseball Hall of Famer George Brett was asked where he ranks among the “all-time famous Georges.” The answer: somewhere in a mix with King George, Curious George and George Bush. When asked who they’d cast to play themselves in a movie, 11-time Pro Bowler Larry Fitzgerald picked Denzel Washington — and so did Gary Woodland. In a hypothetical fight between Charles Barkley and former Knicks bruiser Charles Oakley, Barkley was certain who’d win: his bodyguard.

Knost credits the relaxed loopiness to the relationship he and Stoltz share.

If the Knost/Stoltz friendship was forged in Texas during their SMU/TCU dustups, it fully blossomed in Scottsdale, Ariz. Stoltz migrated to the dry-heat golf mecca in 2008; Knost followed in 2014. Today, they live eight minutes from each other, and every day that Knost isn’t on the road for CBS they meet to record their Sirius XM show in his home office. Add up all the time they share — at Knost’s home, in the “Subpar” studio in Scottsdale, on the course at nearby Whisper Rock, with cocktails in hand, etc. — and they estimate they’re in each other’s company well over 24 hours every week.

“Just like any working relationship, there are times when we get sick of each other,” says Stoltz, who, unlike his bachelor sidekick, is married with one young child and a second on the way. “But it’s been a blast. I love hanging with Colt. I love spending time with him. I get to have fun and talk golf with one of my good buddies. What’s there to complain about?”

Though the show’s success has surpassed their expectations, the work is far from done. There are guests they’d love to greet on the “Subpar” set (Phil Mickelson and Anthony Kim among them) and a merchandise line just getting off the ground. Branding opportunities abound.

“We’re not even close to where I want it to be,” Knost says. “I want to get more than a golf audience. I want a sports audience.”

In the rapidly evolving media ecosystem in which “Subpar” exists, their freewheeling ethos is more than fitting. Whether they’re sipping on “birdie juice” — a catchphrase from the show defined as any concoction that loosens the mood and facilitates under-par scores — or exhorting their listeners to “get amongst it,” Gravy and Sleezy operate under an elemental guiding principle.

“Don’t take yourself too seriously and have a good time,” Stoltz says. “That’s the culture Colt and I want to have.”