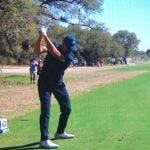 Jordan Spieth on Thursday before hitting a tee shot at the Texas Open.

Jordan Spieth brought his driver back, paused slightly about halfway into the backswing, slowly took the club back farther, then slid his hands forward and returned the club to address. He was readying to hit a tee shot at this week’s Texas Open, and this pre-shot routine was trying to capture a swing feel.

Brandel Chamblee looked at it another way.

“It’s hard to explain that move, other than by saying that it’s allowed him to dig his way out of a slump, to become roughly half the player he used to be,” the Golf Channel analyst and former player wrote on Twitter.

“If you want to thwart or hobble a genius athlete all one needs to do is getting them thinking about their action.”

The tweet came in response to a user asking Chamblee about the routine, writing, “@chambleebrandel please explain Jordan Spieth’s practice swing.  I’ve been playing golf a long time and can not figure out what swing thought he trying to accomplish, it looks so crazy!” The move had been spotlighted just over a week ago in a video posted on the PGA Tour’s social media accounts, and it’s been noticeable at the Texas Open, which Spieth won last year and was part of 10 top 10s for him since last February.

On Golf Channel’s broadcast of Thursday’s first round, after watching the three-time major champion go through the deliberate motion, analyst Gary Koch said it’s an attempt to get in a position to hit a fade.

“Well, basically, he feels like he has a tendency that the club gets stuck behind him and he comes in to underneath,” Koch said. “So he’s trying to get the club pointed left at the top of his swing and then get the club out in front of him to where he can get the club moving to the left going through and produce that little fade.”

Chamblee has previously been critical of Spieth’s swing. Notably, while discussing changes Spieth had been making, the analyst said in a 2020 interview with Golfweek that he could fix Spieth in two seconds.

“There’s consequences to these movements,” he said. “You cannot change the engine pattern. [The video from 2015] is how Jordan plays his best golf. Why would his teacher tell him to change that? Why? He’s either being told to do that or whoever’s watching him doesn’t see that he’s doing that. That would take two seconds to fix. Two seconds. But he’s clearly been told that or somebody’s watching him who is not aware.

“Jordan Spieth should be a better player than he was in 2015 by experience alone. What did he need to do to that golf swing in 2015? He almost won every major he played in. So this necessity to always be changing is just, every game is in a constant state of repair or attack of ideas.

“He didn’t need to change anything. All he needed to do was go to the range and work on shots. Did he have every shot in the bag? I doubt it.”