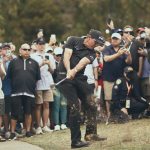 Phil Mickelson had the crowd's full attention on Friday at the U.S. Open.

SAN DIEGO — Russell Henley was six under par and in sole control of the U.S. Open lead on Friday as he studied a 20-footer for birdie at No. 9, his final hole of the day.

As his putt trickled past the hole, a roar went up from the crowd. Not for Henley, whose spectators numbered between one and two dozen. Instead the roar came from the 15th green, some 400 yards away, where Phil Mickelson had just canned a nine-footer for par to stay one shot inside the cut line.

Sunday’s biggest story will be about whichever man plays 72 holes in the fewest total strokes and hoists the U.S. Open trophy. But on Friday, the biggest intrigue on the ground was whether golf’s most recent major champion would make the cut. This is San Diego, after all. It’s Phil Mickelson’s town. For reasons both good and bad, the U.S. Open is central to Mickelson’s career. And on Friday afternoon at Torrey Pines, this was Phil Mickelson’s tournament.

His opening-round of four-over 75 had left him with work to do, and it became clear midway through Friday afternoon that four over would be the likely number to make the weekend. In this case, making the weekend would be more than ceremonial; a condensed leaderboard and a lead at just five under meant that just getting through to Saturday would open up a world of possibilities.

Mickelson’s round got off to a hot start with a birdie at No. 2. He played uncharacteristically steady golf the rest of the front nine, making seven pars in a row before adding another birdie at 10 to get to two over. But a bogey at No. 11 brought the cut line perilously close again.

If there is such a thing at the U.S. Open, Mickelson’s group was an awfully friendly one. He was paired with Xander Schauffele and Max Homa, with whom he plays plenty of practice rounds in San Diego including regular matches at The Farms. The crowd loves Homa. They adore Schauffele. But they positively revere Mickelson.

“It’s similar because we’re all playing in the same group,” Schauffele said. “And it’s different because we’re all trying to win a major, not just having a little money game. Definitely a comfortable pairing for me and I think for them as well.”

But there’s nothing comfortable about charging down the back nine of a U.S. Open on Friday, one shot inside the cut line. Mickelson was swinging well and taking aggressive lines, leaving himself with a series of touchy up-and-downs — from a greenside bunker on No. 15, from the greenside rough on No. 16, from a fluffy lie just a few feet over the green on 17. The crowd, which included his wife Amy, flashing thumbs-ups, ate up the added drama. It wouldn’t be Phil without a little thrill.

“He could have easily let it slide away with a few,” Schauffele said with admiration. “Anything inside 10 feet, he was pretty automatic on the back and a lot of really good chips. He did what he was supposed to do at a U.S. Open, which is grind it out on a hard day.”

All that was left was surviving the gettable par-5 18th, and Mickelson laced one 332 down the left side. Then he found the middle of the green and scared the hole on a lengthy eagle try, tapping in for a birdie 4 and a round of two-under 69, among the very best of the afternoon.

“I played really well today,” Mickelson said afterwards, candidly. “I struck the ball really well, and it made it a lot easier. I was able to play aggressively.”

Mickelson’s closing birdie got him to T30 at two over par. He’s three years ahead and seven shots behind Richard Bland, who co-leads at five under. It might seem like a tall hill to climb, but Mickelson doesn’t shy away from much. He’s a 51-year-old major champion, after all. What does he have to lose?

“I know the course is going to get harder,” he said. “It’s going to get tougher and tougher pins and I’ll try to be patient and pick my spots. I’m looking forward to the weekend. I feel like I’m playing good enough to make a run at it. Hopefully, I’ll put it together tomorrow and do that.”

As Mickelson — and his crowd — approached the 18th green Friday evening, another famous golfer appeared in the background. Rory McIlroy was out on the balcony of his hotel room, overlooking No. 18 green. He took in the scene for a moment, then gently shut his door. A Phil Mickelson crowd won’t help put a baby to sleep, after all.