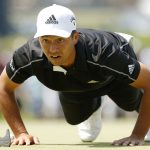 Xander Schauffele has been reading greens a lot closer to the ground this week at Torrey Pines.

One thing has become very clear lately: Xander Schauffele is up for trying anything to make him a better putter.

First, there was the arm-locking that he has added to his repertoire in recent weeks, even if he thinks it should be banned. As one of the best putters on Tour — No. 8 in Strokes Gained: Putting entering the week — Xander somehow still wanted to improve on the greens. So he began incorporating the controversial, in vogue action to his game and has liked the results enough to keep the style in play.

But now, Schauffele has added a new green-reading style to his game as well, and it looks a lot like he’s just doing push-ups on the course. “I figured I could just fill out my shirts a little more, so if I could throw in a few push-ups on every hole it would be good for me,” he said Thursday, jokingly.

Schauffele is incorporating the green-reading move that Patrick Reed’s caddie Kessler Karain has done for years, pressing down into a push-up position to get his eyes as close to the ground as possible to understand the line his putt will take. It’s very similar, though different with his legs, to how Camilo Villegas read greens for years. It’s why Villegas earned the nickname “Spider-Man.” “What happened to the spider golfer” shows up as one of the frequent questions on Google when searching “Camilo Villegas nickname.”

So, Xander, why now? Is it possible for a top 10 putter to suddenly become even better with a new, sorta wacky technique? “Sometimes when I get even lower I may pick up something that I missed just kind of hunched over or crouched over,” Schauffele said. “Just like the arm lock, I’m trying to find any way to get myself an advantage.”

Pros will try anything.

The jury is still out on whether this leads to better putting from Schauffele. There’s always The Read, and then The Putt. Both are important to getting the ball in the hole. But Schauffele is the only player in the top 10 who lost strokes to the field with his putter on Thursday. If there’s any regression to his personal mean with the flagstick, Schauffele might end up winning this event in his hometown.

By then, the rest of San Diego might be trying the push-up technique as well.

“It’s been done before,” Schauffele said, still making his case to the media. “I just try to make sure I don’t really damage the green in any way, shape or form or I’m in anyone’s line. I think I just started doing it on a few putts and then I kind of liked it and now I’m stuck doing 50 push-ups every day, so it’s great.”