Phil Mickelson to play starring role in Bryson-Brooks Match, but not on the course 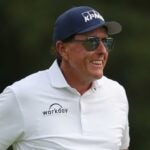 Phil Mickelson won’t be on the course for the latest edition of The Match — a much-hyped Nov. 26 showdown between frenemies Bryson DeChambeau and Brooks Koepka — but he will be in a place where he can provide just as much entertainment: the booth.

Mickelson, whose steady needling and pontificating has carried previous editions of The Match, will be part of TNT’s coverage, calling the action alongside another fabled smack-talker, Charles Barkley, and lead commentator Brian Anderson. Rounding out the on-air team from the Wynn Las Vegas will be on-course reporter Amanda Balionis.

This won’t be Mickelson’s first time calling golf. During the third round of the 2020 PGA Championship, he joined Jim Nantz and Nick Faldo in the CBS Sports booth for 90 minutes — where, if social media reactions were any indication, his insights and quips delighted fans. ESPN commentator Mike Greenberg tweeted at the time, “Phil Mickelson is as good talking about golf as anyone is talking about anything.”

Mickelson, who has competed as a player in all four previous iterations of The Match, is an executive producer of the event, meaning he presumably played a role in giving himself a seat next to Sir Charles. It may prove to be a shrewd decision, given the apparent frostiness between DeChambeau and Koepka. If there’s little banter between the protagonists — or worse yet, forced banter — the 12-hole match could be a snooze, but having a spirited Mickelson at the mic should prevent any drawn-out lulls.

Earlier this year, Mickelson’s representatives told Front Office Sports that they were in exploratory talks with networks to land Mickelson a broadcasting post.

“We’re always in discussions about Phil’s future,” Mickelson’s agent, Steve Loy, told the site. “It wouldn’t surprise me if in the next 12 to 24 months you might see more of Phil on the air.”

The Match airs the day after Thanksgiving on TNT at 4 p.m. ET and will be simulcast on TBS, truTV and HLN.