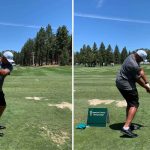 Charles Barkley is enjoying golf more with his new-and-improved swing.

EDGELINE, Nev. — A year ago, in the midst of a pandemic summer, Charles Barkley arrived at the first-ever fan-free edition of the American Century Championship.

“Well, I won’t hit anybody,” he said, asked about the lack of spectators. “So that’s always a welcome relief.”

For so many years, that has been Barkley’s role in the golf world: Comedic relief. He’s been self-deprecating. He’s remained a good sport. Even when his swing deteriorated and his game broke down, he kept showing up anyway.

“To say I’ve been ‘struggling’ on the golf course is the biggest freakin’ understatement in the history of civilization,” Barkley said in the lead-up to this year’s event. For decades, he added, there had been no escaping his swing. It had gained cultural relevance as iconically bad. Tiger Woods had his own imitation of the famous mid-swing hitch. Trying (and failing) to fix Barkley’s game became the subject of an entire television show. He was the owner of very literally the most famous bad golf swing on the planet.

“Listen, it hasn’t been fun for me for 25 years to play golf,” he said. “I only play in Lake Tahoe because I love coming there. And I played in a couple of my friends’ celebrity golf tournaments to raise funds for charity. It wasn’t like I was having fun on the golf course; I’m not going to tell you that lie.”

Barkley had given up hope, and he’d all but given up golf, too.

“You know, when you get old and fat there’s only a couple of things you can do — golf and fish,” he said, reaching into his catalog of one-liners.

It hadn’t always been this way, Barkley remembers. When he first picked up a club, golf was delightfully simple.

It was his second or third year with the Philadelphia 76ers when Barkley, in his mid-twenties, got talking to teammate Andrew Toney about his off-day plans. Toney said he was going to play golf.

“I said, ‘What’s that? Is that thing where they hit that little white ball around?'” Barkley remembers. “He said, ‘Yeah. You want to go?’ I said, ‘Hell yeah, I want to go, I’ve got nothing to do today.’

“Man, I got on that range. And I actually hit that damn ball.”

Over the next several years, Barkley stayed focused on his game. He transformed into a single-digit handicap, reliably beating 85 and breaking 80 on a good day. He was an above-average, happy golfer.

“And then I did the stupidest thing ever,” Barkley laments. “I started taking lessons. I said, ‘I want to get better.’ I should have been happy shooting that score, because I had fun, but I wanted to get better. So I started taking lessons from every single person in the world. And next thing I know I got 10 voices in my head standing over a golf ball, and I went from breaking 80 to couldn’t break 100.”

It wasn’t all bad, Barkley insists. He loved escaping from his fame for a few hours to talk trash with his friends, who he calls “all has-beens.” He relished the peace and quiet. He enjoyed being outside. And he got a kick out of having a specific name for every single brand of poor shot. But the good shots had all but disappeared, and the game had grown tiresome.

At this year’s American Century, Barkley’s bag arrived before he did. Two friends stood guard over his set of PXGs. Barkley ambled over some minutes later, an unmissable 6’6″ presence in grey Nike shirt, black shorts and giant black golf shoes. A line of spectators suddenly appeared at the railing behind him, moths to a curious flame.

For months now, Barkley has been working on his game. Not just playing golf. Working at it. Fans of The Match saw it on display last Thanksgiving, when a less-hitchy Barkley teamed up with Phil Mickelson and held his own in taking down Steph Curry and Peyton Manning. For years, one of the only certainties in golf was that Barkley’s swing was unfixable. Had Barkley suddenly just — fixed it?

The path to recovery, he says, began with an open mind. The process began with a conversation he had with a former Tour pro turned teacher, Stan Utley.

“He said, ‘Chuck, let me work with you a little bit.’ I said, ‘Stan, I’ve worked with everybody in the world,'” Barkley recalls. “He said, ‘well, then one more’s not going to hurt.'”

The first thing Utley did was ask Barkley a simple question. When you’re over the ball, how many people are talking to you?

Ten, Barkley figured. Ten at least. One voice for each teacher he’s gone through. Utley issued a directive: forget them all. For one three-hour range session, they focused on one specific thought. The next day, they added one more.

“He just calmed my brain down and said, ‘Hey, man, you can’t think about ten things over a golf ball.'”

On Thursday at Edgewood Tahoe, Barkley eased into his range session. He thinned his first iron shot. Hit a grounder with the next. But then, four or five swings in, his swing got longer and smoother and suddenly the ball soared out towards the distant Nevada pines, falling gently right-to-left. A high draw!

Over the course of the next 30 minutes, Barkley hit more balls. He shook more hands. He yukked it up with the fans. And while he won’t soon be mistaken for a Champions Tour hopeful, it became clear that solid contact was the rule rather than the exception. The hitch was gone. The ball leapt off the face. A crowd continued to gather, not just spectators but media members and fellow celebrities.

There’s always something magnetic about Barkley’s personality, but on Thursday there was an extra dose of feel-good floating in the air. Barkley was happy. Everyone around him was happy for him. There’s something basically inspiring about someone failing for so long and then finally succeeding. Barkley’s slice of driving-range success was the happiest corner of a decidedly happy golf tournament.

How to make sense of it all? Utley insists Barkley’s transformation was as simple as quieting his mind and focusing on mechanics.

“I’m humored by people that think he has mental issues with golf. Charles’ issues were purely skill issues,” he said. “They have nothing to do with confidence, not mental. He had some bad golf skills working that he’s improved.”

Thursday was the Celeb-Am, which meant Barkley wrapped up his range session and headed to the first tee. He played last and quickest, standing over his ball for just a split-second before taking a rip with driver.

The ball started right and went further right, ultimately settling in a fairway bunker on the adjacent 10th hole. The mid-sized crowd cheered heartily anyway. But the Celeb-Am is a shamble, a forgiving format where the group plays from the best tee shot, which meant Barkley dropped a ball in the center of the fairway, some 130 yards from the flag. His approach landed in the middle of the green, rolled past the hole and settled some 20 feet away. And his putt found the center of the bottom of the cup. Birdie for Barkley.

He grinned the entire way to the next tee, stopping for photos, giving out fist bumps and joking with a young girl in a Steph Curry jersey.

“Are you a Steph fan? Is that because y’all are the same height?” he asked. Sir Charles was feeling good.

So what to expect from him at this week’s tournament? It’s still tough to say.

“I predict he plays really good on day one and I don’t know how much he’s going to celebrate,” Utley said to laughter. “I don’t hang with him at night. And I have an idea that I wouldn’t want to anyway because I couldn’t keep up.”

As for Barkley’s own expectations? He’s investing in his own success. Several weeks ago, William Hill announced 17-1 odds for a wager that Barkley would finish in the top 70 in the 89-person field.

“Listen, man, I’m going to finish in the top 70,” Barkley said at the time. “You need to put more than $100 on me. You need to let me know what casino that is, because I want some of that. I cannot wait now.”

Just months ago, Barkley had all but given up on golf. Now he’s betting on himself. That’s a step in the right direction.