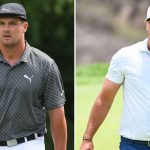 The upcoming match between Bryson DeChambeau and Brooks Koepka has potential — but challenges, too.

The best characteristic of the folks behind The Match, golf’s series of made-for-TV showdowns, is that they’re willing to adapt.

The first Match pitted the game’s two biggest names, Tiger Woods and Phil Mickelson, in a $9 million Las Vegas pay-per-view the day after Thanksgiving in 2018. Viewers flocked to place their orders; when else would they get to see Tiger vs. Phil like this? Overall, the show delivered; we got Woods sending it to sudden death playoff holes, we got a peek at Shadow Creek (Vegas’ mythic golf cathedral) and we got Mickelson winning the entire thing in the darkness on the 22nd hole on a strange, modified par-3 over a waterfall. It was strange and it was wonderful and it was very Vegas.

But not everything worked. The pay-per-view, for one thing. And Mickelson and Woods never quite seemed to decide whether they were doing friendly or intense, so instead they didn’t really do either. Their banter was flat and forced, their golf was lackluster and the whole thing took damn long.

Then the show adapted. Its next iteration brought back Woods and Mickelson, but this time with partners: Woods got Peyton Manning, while Mickelson got Tom Brady. Suddenly there were more characters, more dialogue, more natural banter. There was less dead air, with golfers in carts connected to the broadcasters. There were more golf shots. And there was heightened star power, too — a certain subset of the American populus would watch Tom Brady and Peyton Manning visit the DMV, so watching them play golf added another layer of intrigue. (Note to self: that DMV idea isn’t half-bad…)

Mickelson excelled in the format, so he stayed on to anchor the next edition, which aired the day after Thanksgiving 2020 and featured the redemption of Charles Barkley’s golf game, the all-athlete team of Manning and Steph Curry and a terrific format tweak to modified alternate shot. It wasn’t fast-paced. It wasn’t viral, must-see TV. But it was still fun.

They added a couple wrinkles for The Match IV, heading to Montana and introducing Bryson DeChambeau and Aaron Rodgers to face off against Brady and Mickelson. Rodgers showed up with a surprisingly sharp game, we got to see DeChambeau pound driver at elevation and a bear even wandered through the set. (It was slow, though.)

Now The Match V returns with the original 1 v. 1 format, pitting DeChambeau against rival Brooks Koepka, who is making his series debut. They’ll play 12 holes at The Wynn, just steps from the heart of the Las Vegas Strip. The Match’s announcement was received with excitement and eye-rolls in seemingly equal measure. So who’s right — the believers or the skeptics? In short, we don’t know yet. The Match’s producers and competitors have some questions to answer. Here are five of the biggest:

There’s a reason we’ve been begging for this matchup, whether in a PGA Tour event or elsewhere. Their public beef dates back to January 2019, when Koepka called out DeChambeau for slow play. Since then there have been too many developments to properly catalog. But of late the feud seems to have cooled; Commissioner Monahan called off fans yelling “Brooksy” at DeChambeau, the two agreed to play nice at the Ryder Cup and even finished the week with a public embrace.

When the Match was announced, then, some golf fans were understandably wary. Was the entire thing a marketing ploy? An attempt to climb the PIP leaderboard? Was it all just made up?

My guess: It’s more real than you might think. Think back to the moment this initially took off, when an outtake from Koepka’s interview with Todd Lewis leaked and his reaction to DeChambeau walking by became the eye-roll seen ’round the world. That was real annoyance. There’s no faking a reaction like that. And now they’re taking advantage of it. They’re cashing in on that very real tension. Speaking of which…

2. Will they go friendly or frosty?

There are two approaches that would result in particularly worthwhile viewing here. The first would be a reconciliation of sorts, where the two hash out their differences in an authentic series of conversations that take place over a series of holes. They wouldn’t necessarily resolve anything but they’d at least address the root of the feud. I’m envisioning Zoolander and Hansel getting together for their epic confrontation:

“Why you been acting so messed up towards me?”

Wow, just typing that makes me consider its improbability. But it’s not impossible. The “authentic” note just seems like the toughest one to hit.

The second approach would be embracing the rivalry’s contentiousness. They could each demonstrate their legitimate dislike for the other through open frostiness. Uncomfortable silences. Pettiness. Non-conceded putts. General graveness. The outside chance of a physical altercation would linger over every green. This would be awesome but, again, unlikely. It’s golf.

My guess: DeChambeau is, by nature, friendly and non-confrontational, which might make both options difficult. Koepka is good at staredowns, he’s good at pettiness and he’s good at looking dour. But he has also seemed more comfortable buddying up with DeChambeau in recent weeks, so it’s not clear he could really go full heel here. Hopefully there’s some middle ground they can hit, but managing this balance seems like this match’s biggest challenge.

There’s a reason event organizers added more characters to this thing. Not even Woods and Mickelson could fill four-plus hours of dead space. There’s a lot of pressure to be entertaining when millions of people are tuning in just to watch you walk from the tee to your ball — and these guys are used to making those walks in silence or muttering to their caddies.

It’s tough to keep tension high for four-plus hours when there are just two golfers and they’re forcing banter. And it’s tough to fill the space if they aren’t forcing banter, too. So this is another challenge.

My guess: They’ve taken a few steps to resolve this one. First there are the earpieces, which connect competitors to broadcasters who can guide conversation or introduce wrinkles of their own that take some of the pressure off their mano a mano interactions. Next are the golf carts, which speed up play and avoid the awkwardness of figuring out whether they should walk together down the fairway. And then there’s the decision they’ve made to shrink the competition to 12 holes.

There is an obvious benefit to 12 holes: It doesn’t take as long as 18 holes. The Match has struggled with going too long, and now it will be shorter! But it’s still longer than nine holes, so you’re getting two-thirds the golf instead of just half. That would be unsatisfying.

My guess: We’re still talking about The Match here. It’s fun, but it doesn’t exactly define a player’s legacy. So 12 holes isn’t really a deal-breaker. If we’re splitting hairs, I’d rather get 13 holes than 12, but I think it’s a worthy effort to stave off accusations of “this is boring!” and squeeze into a shorter TV window.

5. What, if any, role will Phil Mickelson play?

The only constant through the first four editions of The Match has been ole Lefty. Now the PGA Champ won’t be on the playing field — but will he be in the broadcast booth? Standing on the 18th hole, challenging each guy to a closest-to-the pin competition? Watching from the adjacent sportsbook, firing in prop bets? Several hours of Mickelson behind the microphone could be exactly the sort of eccentric energy this event demands.

My guess: He’ll be there, reunited with his former partner Charles Barkley, calling the action alongside Ernie Johnson. That’ll be an extremely good thing for everyone watching and trying to stave off a post-Thanksgiving nap.