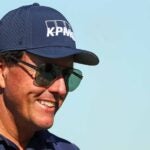 Phil Mickelson will headline the Match 3 on Friday.

Phil Mickelson’s reputation as one of golf’s most generous stars comes largely from the little things. Over the years, his legend as a golfer has been dwarfed only by his legendarily open-handed approach toward caddies, hostesses, valets and even pizza delivery drivers. His random acts of kindness are neither random nor acts — he lives magnanimously.

In the midst of celebrating Phil’s generosity toward individuals, it’s possible we’re leaving out a more impressive feat. While Mickelson’s Benjamin-laden wallet might leave the locker room noticeably lighter, his philanthropic efforts hold the biggest impact over his bank account (and his legacy). Efforts which grew even further on Monday.

Ahead of The Match 3 Champions for Change, Mickelson announced a massive, $500,000 donation to Jackson State University, a historically Black college and university (or HBCU) in Jackson, Miss.

Check out these holiday golf deals

“I am not knowledgeable, I am not qualified to talk about race, okay?” Mickelson said on the 21st & Prime podcast Tuesday. “As a white male, I’ll never be able to understand the challenges that Black America goes through, but I want to be part of the solution.”

The donation, which is likely to increase due to subsequent “bonus challenges” included as part of Friday’s Match, followed similar contributions in recent weeks from Augusta National and Cameron Champ toward HBCUs located around the U.S.

For Mickelson, the donation represents the extension of a promise once afforded to him.

“When I was 8 years old, I had a gift and a passion for the game of golf — I loved it, but I didn’t have the opportunity necessarily to practice my craft,” Mickelson said, recounting the story of the job at a municipal course that stewarded his early years in the sport.

While Phil and Jackson State refrained from offering how Mickelson’s donation will be used (Champ and Augusta National’s donations went toward forming golf scholarships, among other causes), Lefty’s donation figures to give a sizable boost to the school’s $60 million endowment.

“What I’m excited about with Jackson State University is that it gives a lot of people an opportunity that wouldn’t otherwise get it,” Mickelson said. “As we create this Match Champions for Change, we use golf as a way to create change, create awareness and education, but also to raise money to create opportunities for those that need it.”

Mickelson, Charles Barkley, Peyton Manning and Steph Curry enter the week prepared to make the latest wave in golf’s drive toward social change at The Match 3, Champions for Change.

Ahead of Friday’s Match, each of the four golfers has selected a HBCU to receive the charity money raised by the event. Mickelson’s donation represents a half-million-dollar addition to the funds that will be donated to each of the schools.

“Like all sports, golf was exclusionary, and we’ve really made an effort the last couple of decades to be inclusive of everyone and give everyone an opportunity,” Mickelson said. “I want to expose this game to as many people as possible because it will help them in their life for business and relationships, but right now, we’re using it to help those who really need a break.”

Golf fans can catch The Match 3: Champions for Change at 3 p.m. ET on Friday on TNT.