As Phil and Bones part ways, an appreciation of what made them so good together

There has never been a more successful player-caddie relationship than Phil and Bones. Yes, Tiger Woods and Steve Williams—Stevie!—won far more together. Yes, each was at the other’s wedding and they were workout partners. But in the end their relationship was really all about the golf Tiger played. For Phil Mickelson and Jim “Bones” Mackay, Phil’s excellent golf was a necessary starting point. But the reason the duo lasted, and generally thrived, for 25 years is that Mickelson, unlike Woods, needed a true confidant, and Bones was the man for the job. 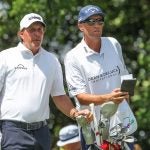 Both are intelligent, verbal people with amazing recall and fast-twitch math skills. But Mackay is a student of people, and that gave him insight into his boss, and a handle on him, that nobody else in the golfer’s inner circle had. Phil had the talent, but still he needed Bones. With a half-crazy artistic genius like Phil Mickelson, you need someone of boundless patience to help him achieve what he can achieve. The life and times of Neil Young, without his career-long manager, Elliot Roberts, would look very different. You know those snazzy pants Phil wears? Bones would order them for his man.

Bones’s job was to get Mickelson in a place where he could play his best golf. That’s why he is unlike any other caddie that came before him. It was a deeper role than any of us had seen before. But Mickelson was a prodigy even before the two had met, good enough to win the Tour’s Tucson stop as an amateur, in 1991. In their quarter-century together, Mickelson has often needed to dance to songs he recorded himself and Bones never wavered in his support. So whether it was carrying two drivers or practicing away from the site of a major or playing catch as a warm-up exercise, Bones was all in. Phil needs somebody to look at him, and Bones did. If anybody ever questioned just what in the hell Phil was doing, it was up to Bones to explain it all, a task Mackay performed often and well.

But Mackay also offered Mickelson candid advice at key times in his professional life. Despite Mickelson’s close relationship with the instructor Rick Smith, it was Mackay who suggested that Butch Harmon might be a better fit for Mickelson. Mackay was there to advise Mickelson on his mid-career move from Titleist to Callaway. Mackay played a significant role in bringing in, at least for a period, the mental coach Julie Elion into Mickelson’s camp. Mickelson has earned his reputation for being accommodating to reporters in victory and in defeat. But it often fell to Mackay to explain the ins-and-outs of Mickelson’s thinking, particularly in the aftermath of the record six U.S. Open runner-up finishes Mickelson has endured.

They have broad similarities. Mackay, 52, is married with two children. Mickelson, 47, has three. Mickelson’s siblings are good golfers. (Phil’s brother, Tim, an agent and former college coach, will caddie for Mickelson for the rest of the year.) Mackay does, too. Mackay’s brother, Tom, an executive at Sony Music, was briefly a professional golfer. Mackay and Mickelson are both intensely verbal, plus-four storytellers with tremendous recall. Both are deeply immersed in the arcana of Tour politics. Both have strong rebellious streaks. Both are total golf junkies.

But Mackay, like Williams before him, never strayed from his working-class caddie roots, even as he became a Tour celebrity in his own right. He often preferred to fly Southwest rather than hitch a ride on Phil’s private plane. (He knew there was only so much time the two should spend together.) Mackay saved every yardage book and every note, walked courses early and often, never used the word we in his life, and always made it clear, to Mickelson and anybody else, that his first job was to carry the bag, to provide the numbers, and to point his long right arm in the direction of the wind. He mastered the basics long before he became part of golf’s most famous two-man show.

Anyone who has ever watched the Masters on TV, or any other tournament in which Mickelson played, has heard the intense exchanges between Mickelson and Mackay when Mickelson is considering a shot. The key to these discussions was that Mackay offered Mickelson options and earth-science details, and Mickelson got a chance to showoff, for others and himself, the wild range of ways he could play any given shot. Those conversations worked because Mackay, a good golfer himself with hundreds of events with Mickelson, had a profound understanding of what his boss could do. Along the way, they improved golf on TV.

Really, they changed the caddie-player relationship. The Jordan Spieth-Michael Greller relationship is the next incarnation of what Phil and Bones began. Rickie Fowler’s caddie, Joe Skovron, got to the heart of the matter when he tweeted, “This relationship helped change caddying. Bones’s professionalism and Phil’s respect for him was unmatched. What a run they had.”

Mackay has a wide set of skills. He has dabbled in television golf commentary and is an insightful and entertaining after-dinner speaker. Also, he has worked for 25 years for a player who is noted for his generosity and has made $84 million in Tour prize money alone, making him second to Tiger Woods. Mackay is unlikely to rush into his next job, whatever it may be. It’s hard to imagine he would not return to caddying, though. Like his former boss, he loves the daily action Tour life provides. 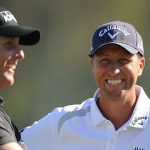 You may also like Phil Mickelson’s Greatest Shots, According To His Caddie

Mackay said in a statement that he believes that Mickelson still plays “at an elite level” and predicts that his now former boss will win again, including at Augusta. When Woods and Steve Williams had their breakup, the two went years without speaking to one other. Phil and Bones will not be like that. In a statement of his own, Mickelson, speaking of the closeness of his family to Mackay’s, said, “We are looking forward to sharing life and friendship with them forever.”

The future is hard to predict. Mackay and Mickelson know that from 25 years of plotting about shots, some more successful than others. What we know for sure is what they did: make the game more entertaining and interesting for viewers, even though that was not their goal. Their goal was to shoot the lowest score possible. Phil did it. Bones helped.