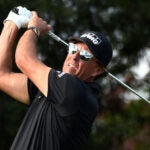 Phil Mickelson hits his tee shot on the 17th hole at the Country Club of Virginia on Sunday.

Phil Mickelson hit his drive left on the 413-yard, par-4 2nd hole at the Country Club of Virginia. Left left. Right onto the rough to the left of the adjacent 18th tee box. Yes, it may have looked like he had skipped a few holes on his scorecard a few weeks ago on his way to a victory in his first Champions Tour tournament. Just not this way in his second.

The pin was about 100 yards away during Saturday’s second round of the Dominion Energy Charity Classic. Between it and Mickelson was a tall tree about 20 yards away.

“He’s got to get this ball up so quick,” an announcer on the Golf Channel broadcast said. “I doubt he can get it up and onto the green. If he does, he is Superman.”

The ball landed about 8 feet away.

“Grab a cape,” another announcer said.

“Don’t see any kryptonite yet,” another announcer said.

Faster – Phaster? – than a speeding bullet, more powerful – powerPhil? – than a locomotive, able to leap tall trees in a single stroke, Phil is a two-time winner on the over-50 circuit. Two events. Two wins. Three strokes behind Mike Weir at the start on Sunday. Three strokes ahead at the end. He is the third player in Champions Tour history to win his first two starts.

“I have a lot of fun playing out here because I can play aggressive, I can get away with a couple of misses, and I can play the way I like to play and see a lot of the guys I haven’t seen in a while,” Mickelson said. “… And then to play a little bit more attacking style, I really enjoy that.”

Like he did on No. 2 on Saturday. Like he did with his driver. Mickelson said this week he was “trying to get a little more pop, a little more carry. It was a little wayward at times, but it was also effective in allowing me to play this course the way I wanted to, which was aggressively.” Next week, Mickelson returns to the PGA Tour when he plays in the Zozo Championship at Sherwood Country Club. In a month, he’ll play in the Masters, the year’s final and third major. It’s not the Champions. But he is a champion.

“I still get a lot of fulfillment when I’m able to compete on the regular tour,” Mickelson said. “So it’s been a year and a half since I’ve won on the regular tour. In Memphis, I finished second, and I love that feeling of having a chance. So I’m hopeful that this tour, this tournament will help give me a little bit of momentum. I’m going to go back to L.A. and play at Sherwood next week and try to compete against those guys. It’s not going to be easy, but I’m going to give it a try and I’m going in with a little bit of confidence now.”