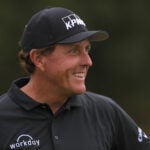 Phil Mickelson during the third round of the Zozo Championship.

Phil Mickelson birdied seven of his first eight holes on Saturday. He missed eight for eight by seven inches. He was a par away from shooting 29 on his front nine at Sherwood Country Club, or another birdie away from a 28.

And Phil. The thrill.

He nearly hit into the water on his second shot on his ninth hole. He hit from a greenside ditch on his third shot. He bogeyed the hole.

Phil on some holes. Phil on others.

The full Mickelson during the third round of the Zozo Championship.

On the 447-yard, par-4 18th, Mickelson hit his drive left of the fairway, then tried to hit around a tree a few yards in front of him. He hooked it. “Carry,” yelled Mickelson, a recent two-time winner on the Champions Tour. It did. Barely. It cleared the water to the right of the green and fell into the ditch.

From there, about 25 yards from the pin, he hit his third shot to within 33 feet. Golf Channel showed the shot. They didn’t show Mickelson. The Golf Channel had positioned their cameras behind the green. Mickelson was in the front. And down.

“All right, you don’t see Mickelson down there, but he is,” announcer Dan Hicks said.

He two-putted for a bogey 5.