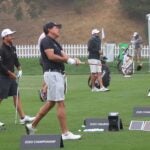 Mickelson ripping drives with a 47.5-inch Callaway Mavrik on Wednesday.

THOUSAND OAKS, Calif. — Phil Mickelson’s equipment setup at the Zozo Championship could look decidedly different from the one he used to win his second straight Champions Tour title last week in Virginia. With three weeks to go before the Masters, the five-time major winner is already turning his sights toward a course he knows better than almost anyone in the field.

Mickelson’s extensive course knowledge is usually invaluable at a place like Augusta National. Just not this year. With the Masters moving to November due to a global pandemic, even Mickelson isn’t quite sure what to expect when he shows up next month. One thing he’s banking on is a course that could play significantly longer than it does in April when the temperatures start to climb and the ball flies.

“I think that the weather and the temperature could make a difference,” he said. “I think the golf course will probably be a little bit more damp and play a little bit longer and require more carry. I think that the guys like what [Bryson DeChambeau] is doing, [Rory] McIlroy, Dustin [Johnson], the guys that can get it up there, it will have a big advantage with that kind of distance, but if you get wind and you get a lot of cold, we could also have a Masters like 2007 where Zach Johnson won in some rough weather. I just think the weather’s a little bit more unpredictable at that time.”

The unpredictability of this year’s Masters has led Mickelson to do some gear tinkering behind the scenes in an attempt to add some additional carry at the top of the set. This is nothing new for one of the biggest gearheads in professional golf. He’s always sought out potential equipment edges throughout his entire career. There’s Phrankenwood, two drivers, no driver and multiple lob wedges. Lefty has done it all.

Maybe that’s why no one should be surprised to hear Mickelson is currently testing a 47.5-inch Callaway Mavrik Sub Zero driver (9 degrees; KBS Tour 60 Category 5 shaft) in an attempt to keep up with Bryson, Rory and the crew.

According to Callaway PGA Tour manager Jacob Davidson, Mickelson has been testing progressively longer driver shaft lengths all season in an attempt to gain ball speed — he’s currently in the low 180s — with an eye on improving his carry distance at Augusta.

If the blueprint sounds familiar, it’s because Bryson DeChambeau is working on an identical plan at home with a 48-inch Cobra driver that he hopes to unveil during Masters week.

Add yards in our Pro Shop

“Now guys that are hitting it in the 180-mile-an-hour, ball speeds are getting pushed to go to the 190s because of Bryson and a lot of guys have to do that to keep up,” Mickelson said.

Of course, going longer in driver shaft length comes with some inherent tradeoffs, namely in the accuracy and gapping departments.

“With the longer driver shaft, we’re still working through those gap issues,” Davidson told GOLF.com. “There will be some more additions, figuring out those gaps between the 3-wood and long irons.”

To fill the gap for this week, Mickelson plans to use a 12.5-degree Callaway XHot 3Deep — better known as the club he used to get around Muirfield during the 2013 Open Championship triumph. The deep-faced fairway wood was instrumental in allowing Mickelson to go “driver-less” and keep it in play during the win. The hope is it will provide a similar security blanket for when he isn’t going-for-broke with the driver.

Thankfully, Gerritt Pon, Mickelson’s personal club-builder and a senior club performance analyst at Callaway, still had some extra heads in the shop when Mickelson inquired about the possibility of having one built last Friday.

“I had a couple stashed away,” Pon told GOLF.com. “But if something happens to this one, there’s not a whole lot we can do to replicate. We just don’t have anything in the current produce line like it at the moment. Players just aren’t requesting them.”

Unlike a standard fairway wood, XHot’s deep face makes it an ideal option off the tee, which is how Mickelson would likely employ the club. Pon bent Mickelson’s head stronger by a half-degree and added a KBS shaft that’s 10 grams lighter and an inch longer than his previous 3-wood.

“[Phil] felt it was a great option between the longer driver and the next club in his set,” Pon said. “He’s had a lot of success with that club, so it’s something he felt comfortable adding to fill the hole.”

Getting comfortable with the new setup will be critical for Mickelson as he weighs the viability of using a 47.5-inch driver and a 2-wood at Augusta. He only has a few more starts to get there. No pressure.

This stylish bag is the perfect choice for tech-savvy golfers