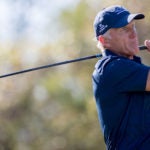 Greg Norman continues to believe in the concept of the Premier Golf League.

This is the finale of a four-part Bamberger Briefly series in which Greg Norman offers his insights into various golfy subjects. Part I: Norman on Michael Jordan’s golf. Part II: Norman on helicopters. Part III, Norman on Tiger.

HOBE SOUND, Fla. — The Premier Golf League is not dead. The world needs it now more than ever! So says Greg Norman, an Aussie who has lived in Florida most of his adult life and is a 2001 inductee into the World Golf Hall of Fame.

Golf needs fewer events with more star power, Norman says, and that will ultimately happen because golf fans across the world will want it to happen. Norman says he has had no communication with the league’s organizers since February, but his understanding is that the first PGL event will be in January 2022. There may be no bigger believer in this new league than Norman.

“What I’m hearing is that the PGA Tour, against all their bylaws and governances, is talking about putting aside a $40 million pot for eight players, with $8 million for the top player,” Norman said in a recent interview. “The PGA Tour is re-tweaking their model with the PGL out there. If you’re player nine, 10, 11 or 12, I think you’d be pretty pissed off.”

Norman said he didn’t know how the PGA Tour would rank the eight players. This pot would be beyond the FedEx Cup playoff money.

Norman, who is 65, is not an active golfer these days, either in the professional or recreational ranks. But he is, in normal times, out and about often in South Florida, where many Tour players live, and he hears things the ordinary golf fan would not hear.

“I also understand that there are four or five European Tour events that the PGA Tour would like to put under its umbrellas and run as world golf events,” Norman said. This, Norman said, was also a response to pressure from the PGL.

Norman was the architect of what he envisioned as a world golf tour more than 25 years ago. Deane Beman, then the PGA Tour commissioner, outmaneuvered Norman politically and essentially buried the idea.

Despite the countermoves that Norman says the PGA Tour is making, he believes the PGL will still be able to establish itself because there are too many weeks on the PGA Tour schedule with fields that lack star power. He says he has no financial stake in this proposed PGL, although it is not hard to imagine him with a role in it. Norman says his sustained interest in this subject is rooted in his desire to see “golf grow on a global basis.”

Norman was asked if the PGA Tour’s purported response to the PGL is just an example of capitalism at work.

The Tour declined to respond to Norman’s comments.

“We’re focused on our Return to Golf,” a Tour spokesperson, Laura Neal, said by email.

Return to Golf is a phrase the Tour is using to describe the first four announced events — in Fort Worth, Hilton Head, Hartford and Detroit — beginning on June 11. Those events will be played with full fields, with caddies and without fans.

How players who live overseas will get to these events remains to be seen. Norman imagines that by January 2022 international travel will not be the issue it is now. For the PGL to work, with events all over the world, that would be a necessary starting point.