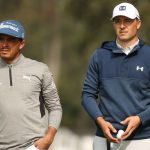 Rickie Fowler and Jordan Spieth in 2020.

As an acronym, PIP sounds charming. It stands for Player Impact Program and it was launched earlier this year by the PGA Tour. It is not — repeat, not — a get-rich-quick scheme. Its beneficiaries already are rich.

As deftly reported by Eamon Lynch of Golfweek, the Player Impact Program is a $40 million pool with a year-end payout to the game’s top-8 players as measured by (among other things) how often their names are googled!

The plan had been in the works for some time. In a manner of speaking, Greg Norman broke the story, or some of it, 11 months ago when he told GOLF.com:

“What I’m hearing is that the PGA Tour, against all their bylaws and governances, is talking about putting aside a $40 million pot for eight players, with $8 million for the top player,” Norman said then. “The PGA Tour is re-tweaking their model with the PGL out there. If you’re player nine, 10, 11 or 12, I think you’d be pretty pissed off.”

For a man who hasn’t played the Tour in 20 years, Norman, who lives in South Florida, hears a great deal. He had a keen interest in this issue because years ago he promoted the idea of a World Golf Tour. In more recent years, pre-pandemic, a group, backed by Saudi money, emerged, trying to launch something called the Premier Golf League. Norman had a heightened interest because the PGL, as a concept, was a descendant of what he was proposing.

What I find so dispiriting about PIP — love the name, though! — is that it undercuts what makes the PGA Tour the PGA Tour in the first place. The Tour is a series of athletic competitions, played across the country and sometimes in exotic locales beyond our borders, by which talented golfers play a difficult sport strictly by its well-defined rules and get paid on the basis of their scores.

It was (it is) the best example of the free market, sports division, at work. No guaranteed anything. You could have a bad haircut, crooked teeth, baggy slacks. Didn’t (and doesn’t) matter. If you and Brandt Snedeker both shoot 277 for a T3 finish, you both got $588,624 by direct deposit.

Everything else was (and largely is) rewarded by the marketplace. Your shoe deal, your club deal, what you would get for a corporate day. Maybe you cared about that stuff, maybe you didn’t. That’s where these X-factors and Q-ratings mattered.

The Golfweek report outlines the various “metrics” by which these eight players will get paid. In addition to Google search numbers, take a look at these elements. None of them bring to mind the intensity of Hal Sutton, with the TPC title on the line, grunting, “Be the right club today.” None of them have anything to do with what you shoot.

The last of these is a formula that Shawn Spieth, father of Jordan, has been developing for at least the past five years. Jordan served on the PGA Tour Policy board from 2019 until this year, when his term concluded. Rory McIlroy took his place, the first non-American player to serve on the board.

The top-ranked player in this bonus pool would get $8 million. It’s hard to imagine a scenario in which McIlroy and Spieth don’t finish in the top-8 this year. Maybe Tiger Woods will, too — even if he doesn’t play in a tournament.

“Golf at the highest level has, nowadays, sort of transitioned from a competition tour to entertainment,” McIlroy said early last year. He was never on board with the PGL program. As one of the game’s most popular players, there’s no reason for him not to like this new payout system. “Right? It’s on TV. It’s people coming out to watch. It’s definitely different for me than what it was before.”

I would disagree with that last sentence. Professional golf is not different than it was before. By and large, the Tour is a series of 72-hole, four-day, stroke-play competitions — may the best man win and if you don’t you’ll still make out all right.

Who: Stew.
What: Won at 47.
Where: Hilton Head, on Calibogue Sound.
When: April 15-18
How: Fairways and greens, with a shaky putter and a steady caddie.

It was a good TV show. That was the byproduct, not the product. But we have so many things backward these days.

Eddie Murphy was on late-night TV a couple nights ago. Somebody asked him about some of his classic comedies from yesteryear. “Everything is better” now, Ed said. I would say it’s largely true. It’s a generous thought. But our communal obsession with various social-media platforms, with being popular and famous and always, always richer is getting us away from some of our core values. There is no way that everything is better. But it’s a great sentence for your late-night entertainment. It sells.

The core value of the PGA Tour has always been for the golfers to get paid for what they do on the course, to bring some diversion to the cities they visit and to leave those towns in better shape than they found them. (The charitable arm of the whole thing.) Other outfits, not the PGA Tour, will take care of the rest, paying players for having a pleasing swing, nice hair, large Instagram following, etc.

The core value of the PGA Tour has always been for the golfers to get paid for what they do on the course.

If the Tour thought the PGL was a threat, that the PGL could lure away its top players with guaranteed paydays, the Tour should find a way to let the top players make more money that is in keeping with its core values in the first place. In other words, something that relates strictly to athletic performance. Scores shot. Scores shot within the rules.

(Quick, scary aside. WWE wrestling is excellent entertainment for many. It is not sport. It is a TV show. The wrestlers are brilliant actors. There is no rule book, not like the one PGA Tour rules officials carry.)

You could ask this, if you’re so inclined: When is enough enough?

That’s not a common question in these United States. We are bred, broadly speaking, to want more and more and more. It has sometimes served us well and (imho) often has not. That’s another subject for another day, but it factors in here.

But, since it’s in the air: When is enough enough? Those top-eighters are all making millions playing golf. You could say they should get what they can while they can.

You could say other things, too.