PGA Championship Notebook Dump: 3 stories we’re just getting around to 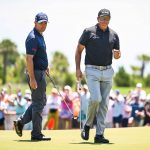 At the PGA, Padraig Harrington and Phil Mickelson proved that age is just a number.

The story of the 103rd PGA Championship was, of course, Phil … and Brooks. And the brutish, breezy Ocean Course. And the 72nd-hole chaos. But there were smaller, less consequential moments and observations. There always are at the majors. In the wake of the thrilling week that was, we asked our three on-site reporters to shake out their notebooks and spin us a yarn they didn’t tell last week.

The best way to get to the golf course was by bike. On Kiawah Island, all through the playing of the PGA Championship, you saw bikes. Not like Bike Week in Daytona Beach, where thousands and thousands of helmeted fellas and gals chug into town on their Harleys. During the Florida Swing, in and around Orlando and Jacksonville, you see the bikers whenever you stop to buy gas or a six. It’s a great scene. Great Americana. But the bike-week scene at Kiawah was not that. Nothing like that. These were bike bikes.

You know the kind. Picture David Feherty on his bike, on the side of the road after another mishap. The 27-speed gear-shifter mangled beyond repair. Not that. Or Rory McIlroy and our own Jonathan Wall on their Peletons. Nothing like that, either.

What this was was hundreds of men, and some women, most of them on the north side of 55, cruising slowly along wide bike paths on fat-tired bikes with foot brakes, big baskets above the front tires, wide, mushy saddles (seats) and upright handlebars. And still the cyclists slouched..

These were rental bikes, or bikes borrowed from the owners of the houses and villas and condos that were occupied for the week by fans of the golf. Should you wear a helmet while wearing a bike? You should. Was this crowd? It was not. At 4 or 5 or 6 miles per hour, the risks were minimal.

Just like the Daytona Bike Week crowd, this gang had a uniform, too. Shirts with club logos tucked into khaki shorts, the whole package secured by embroidered belts. Golf caps, of course. White golf shoes. Faces slathered with sunblock.

Most of the fans came to the course on giant air-conditioned tourist buses, roaring and noisy and cumbersome on the island’s narrow roads. The bikers snorted, their mode of transportation so superior. Their main struggle was to get enough speed up to keep going forward on a reasonably straight line. Either that, or they were drunk.

And then they’d dismount near the main entrance, where there was a parking lot for bikes, maybe a quarter-acre big, deep in a woods, a shortish walk to the course. They’d hike on in. They were there for the golf, but their iPhones were already giving them credit for some burned calories. Talk about your win-wins.

At Home on the Range
by Dylan Dethier

The only commonality they had was a shared intensity, but even that was different: Koepka seeks to exude effortless, nonchalant jock swagger, while Mickelson’s intensity is decidedly effortful. His golf, all week, looked difficult (and brilliant!).

But an hour earlier two other final-round playing partners approached their range session very differently. Jordan Spieth and Rickie Fowler each began the day at even par, on the edge of contention. Fowler and caddie Joe Skovron set up first, near the far right end of the range. The entire range was open, but Spieth and caddie Michael Greller took the spot directly next to Fowler. Their respective warm-ups were dotted with brief interruptions; the caddies chatted, the players chatted, they all chatted together. Skovron pulled up a video on his phone of Greller hitting a pivotal shot in a match they’d played together and all four huddled around to check it out.

None of this is easy. All four of the aforementioned golfers are reminders of that.

Koepka, despite his greatness, is a reminder that golf is plenty taxing on your body and that to play at the highest level your entire engine needs to cooperate.

Fowler, despite his talent, is a reminder that coming out of a slump is not actually inevitable. Out here, it’s awfully difficult just to keep pace.

Spieth, despite his mixed results of late, is a reminder that coming out of a slump certainly is possible. Even with the eyes of the golf world upon you.

And Mickelson, despite his age, is a reminder that the golf ball doesn’t know a whole lot about the person hitting it. The ball is more concerned with the object colliding with it.

The range at a professional golf tournament is a reminder just how many ways there are to do this successfully. Swings look wildly different. Body types, too. Demeanors. Routines. What they all have in common is an attention to detail and an ability to hit the ball on the ground with the dead center of that clubface. I spent a lot of time there last week, just watching.

For the past few years, the narrative has been set: That golf is changing. That the inevitable march of human progress is breaking apart the game as we know it. That a fusion of technology and athleticism is giving rise to a new crop of emerging golfers. Innovators, ready to render everybody else obsolete. They’re coming. Watch your back.

And then 50-year-old Phil Mickelson became the oldest man to win a major, fending off a player nearly half his age with relative ease.

With history officially re-written, it’s perhaps time to consider the growing body of evidence that the real innovation from the current revolution may not be giving rise to new careers, but in extending the life of existing ones.

It’s undisputable that young players are equipped with better information than ever (and more of it!). Their games have been shaped by that information, which means there’s an underlying level of trust.

But here’s the thing about information: It comes in many forms. Some of it’s good. Some of it’s great! Some of it is just okay. You can have too much information, or not enough. Sometimes the information you have is underdeveloped, flawed or just plain wrong.

It’s why the best information is the kind served with a hearty dose of skepticism, the kind that comes with having been there and done that. To know a salesman when they see one because they’ve fallen for that schtick already, or to bat away something that makes sense in theory but doesn’t work in practice, because they’ve already tried it.

Phil Mickelson, navigating the Ocean Course with his 48-inch high-tech driver and 19th century-style blade putter, embodies the best of both schools of thought. But he’s not the only one. Alongside Phil in the top 5 last week was 49-year-old Padraig Harrington. A month earlier, 48-year-old Stewart Cink won the RBC Heritage. A few months before that 49-year-old Brian Gay again found himself in the winner’s circle. (Cink and Gay both made the cut at Kiawah.) Meanwhile, 63-year-old Bernhard Langer continues to be the man to beat on the Champions Tour.

These are players who have access to the latest and greatest information, then use their life experience to take the essential next step of figuring out how to actually use it.

“As you gain experience, you lose innocence,” Harrington said. “There is a sweet spot on the way up.”

And as Mickelson will tell, sometimes it’s really, really sweet.