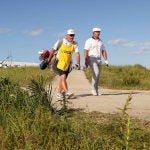 Bryson DeChambeau leaves Thursday in contention and thoroughly exhausted at the PGA Championship.

The 27-year-old won the U.S. Open at Winged Foot in September, conquering what many believed would be the hardest test in golf in several years. Thrashing through brutal rough and tight, firm conditions, DeChambeau captured his first major championship by a clear margin — six strokes.

“This is the most difficult golf course that I’ve played on Tour, and that is a straight-up fact for me,” he said after his first round at the PGA Championship Thursday. “That requires a lot of energy.”

To his credit, DeChambeau performed fairly well for someone in the most difficult professional setting of his life to date. He overcame swirling winds and an inconsistent short game to shoot an even-par 72, placing him (as of this writing) three strokes back of the opening round leaders.

The Ocean Course at Kiawah Island — the site of this week’s tournament and source of DeChambeau’s frustrations — was built with a brutish test in mind. The course tips out at a hair over 7,800 yards and has a 155 slope rating, the maximum allowable under the USGA. When the PGA came here in 2012, howling winds helped to create the hardest round in tournament history (the scoring average for that blustery Friday: 78.1).

“You play nine holes downwind and nine holes into the wind, and sometimes it’s very difficult to gain momentum with the pin locations where they were today,” DeChambeau said. “You barely miss it in the rough, and you’ve got no chance to get it onto the green. Some holes, where you just hit a bad shot, and it kind of comes off the slope with the rest of the hole.”

Some of the challenge at Kiawah is owed to design and setup, but some is simply owed to nature.

“It’s windy and you’re over a 4-footer. The wind is blowing really hard, and you think it’s going to break. When the wind stops, it’s not going to break,” DeChambeau said. “It’s all just a really difficult thing that you’ve got to control out there. It’s a lot of work.”

The Ocean Course played nearly 200 yards up from the tips Thursday, a decision made by the grounds crew to keep conditions varied throughout tournament week. If the wind holds, it’s not inconceivable that we could see a weekend round play even harder than Thursday.

“The wind just kicked my butt. It’s hot. Just grinding out there, it takes a lot out of you,” he said Thursday. “Working really, really hard to hit every shot the exact way I want to, and then it doesn’t happen, and you’ve got to be comfortable with it and going, okay, how do I get up-and-down?”

Indeed, Kiawah’s strongest defense might be its most fickle. If winds die down, there’s no reason DeChambeau (or any of the other names in contention) can’t nab a win in the same vein as Rory McIlroy’s 2012 PGA victory. In that year, McIlroy took advantage of tranquil post-storm conditions to win by eight strokes, tied for the most-ever at a PGA.

On Thursday, though, Kiawah proved that if the conditions are right, there’s not a golfer on earth capable of overpowering her.

“It was very, very difficult, I think there were numerous holes that didn’t feel like they were a par-4 or a par-3,” DeChambeau said. “It was diabolical with the wins, you just had to ultimately stay patient. You’ve just gotta be persistent, consistent, and have a lot of resolve out there. It’s all up in the air right now, and whoever stays the most patient out there is going to do really well.”