The original Tiger Tracker: For 25 years, he’s been bringing Tiger Woods to the masses 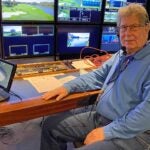 ORLANDO — Doug Grabert, the longtime golf director for NBC Sports, has figured out something about the Father-Son event that’s being played here this weekend, the one starring a 44-year-old icon (Tiger Woods) and his son (11-year-old Charlie, named for Charlie Sifford). Grabert is way too modest to take credit for this revelation, but this reporter is here to tell you that it’s Grabert’s.

Yes, it will be a nice father-son bonding weekend.

Yes, people are curious to see Charlie’s golf game for the first time on a national stage.

Anybody could rattle off those three things. But here’s where Grabert shows his understanding of the man: Tiger’s here to win, or die trying. That’s who he is. Grabert has seen thousands of golfers march fairways and cross his screens in various broadcast trailers over the past 38 years. He’s never seen a player more competitive, or more expressive, than Tiger.

By all accounts, or at least according to Justin Thomas and Tiger himself, Charlie loves to compete, too.

This isn’t hit-and-giggle. This is showtime.

The golf — here at the PNC Championship at the Ritz Carlton Golf Club — will be on NBC on Saturday from 2:30 to 5 p.m. Sunday’s finale will be on from 3-6. One veteran golf agent predicted that the event’s ratings will outperform last month’s Masters on CBS. As it happens, this is Doug Grabert’s final event. He’s done hundreds. His retirement begins Sunday night.

“Some of those tees are 70 yards ahead of the back tees,” where most of the pros will be playing from. “Some of Charlie’s tee shots are going to be used.” If Charlie clocks one down the middle — and his good ones can go 200 yards — and Tiger is wide and right, Tiger’s going to be one grateful playing partner.

Now does it matter whether Tiger and Charlie win or even contend? Of course not. But Grabert’s insight will inform the weekend telecast. As a director, he’s been covering Tiger for 25 or so years. His work is once intimate (the closeup) and at a distance (his broadcast truck can be a mile from the action). He’s never met Tiger Woods, at least not face-to-face. But he’s brought Tiger to millions of us.

You likely know this iconic moment from Tiger’s career. It’s one of the iconic moments of Grabert’s career, too. Sunday afternoon, late. Fourth round of the 2008 U.S. Open. Torrey Pines, a lifelong playground for Woods. Rocco (Mediate) in the house — in the scorer’s trailer — at one under, with the lead all to himself. Tiger on the home green, sizing up a 12-foot birdie putt. If Woods could make the putt, he’d be at one under, too, and the U.S. Open would be settled in a Monday playoff. His body, you may recall, was falling apart. At times he was struggling to walk. Charlie was not watching. (He was born eight months later.) But millions of others were, none of us more intently than Grabert.

NBC had a camera on Rocco. Another on Tiger. Another on his ball. Another on the hole. Another, ground level, showing the green and the amphitheater around it. Another on a tall, high swinging arm called a jib. Go to three, go to four, go to Dog, go to jib. Grabert, every bit as focused as Woods, instructing his technical director, Mark Causey, what buttons to press, for our viewing pleasure. Bapabapabababop. Posterity would come later.

Dog was Mike Wimberly. The plumber can come back. The reporter can make another call. In live TV you’ve got one chance to get it right. That broadcast won NBC Sports an Emmy. The putt had no right to go in, it was so wobbly, and it had every right, it was struck so purely. Rocco’s face said it all: I knew he’d make it. Tiger’s face said more: This is what I live for. Grabert, too.

He grew up, in the 1960s and ‘70s, on the outskirts of Cleveland, caddied through high school at Kirtland Country Club and loved everything about live TV. His father had a friend from church — St. Gabriel’s, in Mentor, Ohio — named Gene McGuire. Mr. McGuire was the business manager at WKYC, the NBC affiliate in Cleveland. Mr. McGuire brought Doug to work one day. Doug was hooked. He caddied in the 1973 PGA Championship at Canterbury for Ray Floyd. Jack Nicklaus won. Floyd finished T35. Doug was hooked deeper yet. He graduated from Kent State in ’77, went to work for KYC and, all these years later, is still drawing an NBC check. At a tournament, years ago, Grabert reintroduced himself to Floyd. Grabert knew that Floyd could not have possibly remembered, but he didn’t let on. Grabert has seen a lot of Raymond Floyd, at senior events, at majors, at Ryder Cups. Grabert has directed seven of them.

Ohio runs through this story like a snowplow through slush. Basketball, and Grabert has done his share of it, is played in Cleveland and Detroit and Chicago. Golf on NBC is played in San Diego and Phoenix and Orlando.