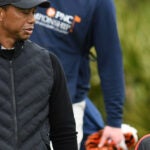 Tiger and Charlie team up this week in Florida.

Tiger Woods’ press conferences are quite fascinating. Not for the content within — Tiger usually keeps the good stuff under a pretty tight lock-and-key — but because of how methodically Tiger navigates his way through a series of potentially hazardous questions with such focused discipline, the same way he picks apart golf courses. He’s the equivalent of a party-line politician, reciting talking points from a script of his own devising, and never deviating.

On Thursday, ahead of the PNC Championship, he spent more than 10 minutes getting peppered with questions about his son/playing partner: Charlie. The theme of Tiger’s responses quickly became clear: Like any good parent, all he wants is for Charlie to enjoy himself.

He said it once…

“I just want him to enjoy it.”

“Seeing him enjoying this, enjoying being out there, that’s the whole idea.”

“It’s about him enjoying these moments, and that’s what he’s doing.”

Rest assured, there were lots more in between. But along the way, he also dropped a revealing tidbit about his overall approach toward coaching (if you can call it that) Charlie. And if you’re a parent of a junior golfer out there, take note.

The cornerstone is, once again, for Charlie to enjoy playing golf, first and foremost. For junior golfers, you might as well not play golf at all if you’re not going to play for the right reasons. Take note, parents, because it’s so important, and can’t be repeated enough.

Outside of that, it’s pretty clear that Tiger treads with a pretty light touch when it comes to Charlie’s golf swing. Analyzing young Charlie’s impressive swing, it features various elements that are common among junior golfers who are still developing physically.

And that’s OK! It’s a good thing, in fact. The worst thing you can do to a young junior golfer like Charlie is get them bogged down in overly technical minutia. Again, at this age, it’s about enjoying yourself and figuring it out yourself. But there’s one thing Tiger does seem to be encouraging Charlie to do: Develop his feels, and use them to hit different golf shots.

This idea of using certain feelings to “create” different kinds of shots is an interesting one, and it’s something Tiger brought up again later on: “He’s enjoying hitting shots and creating those shots … feeling the shots.”

When Tiger’s talking about creating different shots, he’s talking about shot-shaping. Knowing how to hit fades on command; knowing how to hit draws; knowing how to loft one high or hit a low stinger. The importance of controlling your golf ball is something we’ve seen Tiger illustrate time and time again, and rather than refine young Charlie’s golf swing to an exacting degree, that’s the skill he’d rather help Charlie develop. Developing your feel — your golf instincts — and using them to control your golf ball.

Because, as Tiger knows from Earl’s lessons to him, your swing may change, but your instincts and feels might not.

“It’s all about feels,” Tiger said. “[Earl] did that and I’m doing the same thing with Charlie.”

And therein lies the lesson for junior golfers out there, and parents of junior golfers who may be reading this. Park the overly technical stuff, and focus on helping the young golfer develop their feels. And then, using those feels to control your golf ball, to hit different shots. It’s not about how you do it, it’s that you develop something that works for you.