Welcome to PNC Championship week on the PGA Tour, which rivals a major championship week in terms of hype because of the presence of the father son duo of Tiger and Charlie Woods making their second appearance. It’s the first time we get an up-close look at Charlie Woods’ golf swing, and golf fans are very excited about it. We’re not going to get carried away — he’s only 12 years-old, after all. Let the kid enjoy himself! — but we are excited, which I think is fair.

I’m excited anytime I get a look at a new golf swing, let alone one related to Tiger Woods. So, to get a full briefing on it all, I called up GOLF Top 100 Teacher Jonathan Yarwood, who spends his days developing junior golfers in his role as the Director of Instruction at the International Junior Golf Academy, to hear his expert take on young Charlie’s move. Parents of junior golfers, take note. There’s a lot you may learn about your own child’s golf swing watching the way Charlie moves… 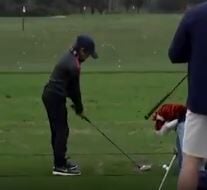 Yarwood says Charlie could do with a touch more knee flex at setup, but overall says Charlie has a fundamentally solid setup with a slightly-strong grip.

“Lots of juniors have very fast lower body rotation, which you’ll see later in the swing, so he uses a stronger grip to counteract that,” Yarwood says. 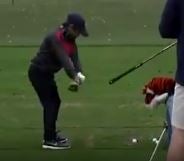 As Charlie Woods’ golf swing begins, Yarwood likes how Charlie uses the ground to get the club moving.

“His strong grip causes him to roll the club open slightly as he begins to coil into the ground” Yarwood says about Charlie’s takeaway. 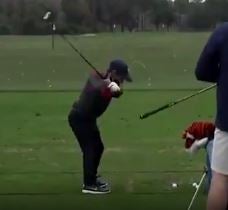 Yarwood says Charlie’s hands are lifting on the way back, which is a common move among junior golfers whose bodies are still developing and have yet to build the core strength to turn the club around their body.

“You can see Charlie’s arm swing tracking high,” Yarwood says. “He’s probably not strong in his core just yet, but it’s something he’ll develop over time.” 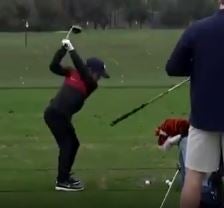 4. Top of the backswing

As he reaches the top of his backswing, Charlie’s arms are high and his torso is fully turned. Charlie gets into the same position as many junior golfers here, Yarwood says, and it’s important for parents of junior golfers to know why.

“Charlie’s only a young kid and his body is still developing…like a lot of kids, his body will outrace his arms on the downswing,” Yarwood says. “He keeps some flex in his knees to try to give himself some stability before his lower body begins rotating.” 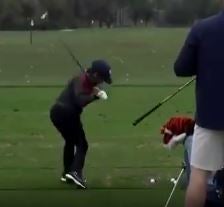 Here you can see Charlie fire his hips aggressively to build impressive speed. The club moves slightly over-the-top, which Yarwood is careful to note is common in underdeveloped juniors.

“His hips are firing, which sends the arms are shooting out slightly steep,” Yarwood says. 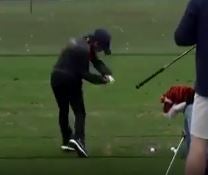 It’s through impact where Yarwood is most impressed with Charlie Woods’ golf swing, and is where shades of his father’s influence begin to come through.

“Being Tiger Woods’ son, he uses phenomenal athleticism to redirect the club using a huge amount of right side bend,” Yarwood says. 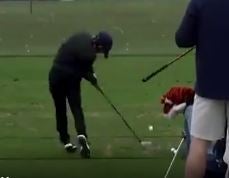 At impact, you cans see Charlie continue rotating and pushing off the ground for maximum power, Yarwood says.

“Like his dad, Charle’s feet are off the ground, he’s raised that handle up, and he’s pushing up off the the ground to hit up on the ball,” Yarwood says. 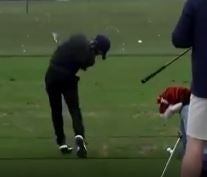 The club is moving around him with no sign of early extension — which Yarwood says is another sign of Charlie’s impressive athleticism.

“He’s rotating within his posture as he moves the club to his left,” Yarwood says. 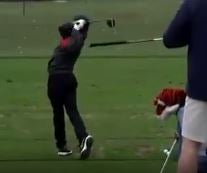 And of course, a picturesque position to finish it all.

“All the speed Charlie generates slows to a balanced finish,” Yarwood says.

In all, Charlie obviously has a very good swing, but Yarwood says it’s important for golf fans not to get carried away. He’s still so young; the most important thing is for Charlie to have fun learning and playing the game, without the pressure of expectation.