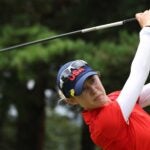 Nelly Korda hits her tee shot on Saturday on the 9th hole at Kasumigaseki Country Club.

Nelly Korda, after building a three-stroke lead on Friday after three rounds at the Olympic women’s golf tournament, was asked if she was looking ahead to what it would mean to win. “Oh yeah,” she said. “I feel like everyone does it, for sure.

“But that’s when you need to take a step back and be like, OK, you know, there’s still 18 more holes to go; there’s still a lot that can happen.”

With four holes on Saturday, she was right.

Leading by two on the par-3 7th at Kasumigaseki Country Club, Korda hit her tee shot to the right of the green, then flubbed two straight pitches before finishing with a double bogey. She’d leave the hole tied for the lead with Lydia Ko and Aditi Ashok.

“That was such a tough place to try to get up and down from,” analyst Kay Cockerill said on the Golf Channel broadcast.

Pitch one, from about 25 yards off the green, landed just on the green, then trickled back a few yards to her right. Pitch two, after about a 30-second wait, nearly went the same way, the ball dribbling back to her white shoes. Korda put her hand to her temple.

“She’s got the right idea that she’s going with a little bit of a lower trajectory shot, but she doesn’t hit it with enough authority,” Cockerill said on the broadcast.

“No, I think a little time over by the golf bag right now would be good,” analyst Karen Stupples said. “She just jumped in so quickly.”

And Korda was leading by three again.

“And she said yesterday that the thing she was most proud of was her fight,” Cockerill said on the broadcast. “Well she’s showing some fight today.”