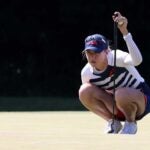 Nelly Korda's putting has carried her into the lead at this week's Olympic women's golf tournament in Tokyo.

In golf as in life, sometimes the best fixes are the ones that just make sense. For some players, that might mean a tweak in setup or in posture. For others, the fix could be as simple as a change in mindset. For Nelly Korda, the ascendant No. 1 player in the world and current leader at the Tokyo Olympics, the solution was something even simpler.

Shortly before we saw Korda tying Olympic records and winning major championships, she was an uber-talented player stuck on the cusp of greatness. She’d won three times in four years on the LPGA Tour, though her performances at majors seemed to indicate she had another gear that she’d yet to find. Four top-10 major finishes in that time (punctuated by a runner-up at the 2020 ANA Inspiration) seemed to only confirm the general feeling around her game.

But then 2021 hit and things made a dramatic shift. Korda has won three times in less than eight months, including her first-ever major at the KPMG Women’s PGA at Atlanta Athletic Club in June. At the Tokyo Olympics on Thursday, she tied the single-round Olympic scoring record — a blazing, nine-under 62 — to secure a multiple-stroke lead heading into the weekend of the event.

So, as Korda eyes her first Olympic medal, it’s fair to wonder: what’s different? As it turns out, at least some of the answer is tied to her putting.

Back in August 2020, Korda began experimenting with a slight shift in her putting grip, opting to use the “left-hand low approach” that’s worked well for players like Jordan Spieth.

“I actually switched to it for the first time last year [at the AIG Women’s Open] was my first event left-hand low,” Korda said Thursday. “I always wanted to try it.”

The reason for the shift, as Korda explains it, was relatively simple: balance.

“I always putted more with my left shoulder up and I wanted to see how it would be if I would have my shoulder square at setup,” she said. “The only way to do it is if I gripped [the putter] left-hand low. My shoulders just rock so much better and I’m just connected more with my chest when I’m putting when I grip it left-hand low.”

Elsewhere, the results have been more pronounced. Korda has become the unquestioned top player in the world, and is beginning to cash in on her prodigious talents. And as she points out, the switch has created a virtuous cycle: the more putts she makes, the more confidence she feels, which boosts the other parts of her game.

For Korda’s putting game, the switch couldn’t have been simpler. Becoming the best player in the world? Now that’s a bit more challenging.