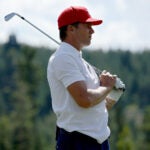 Tom Brady had a star-studded encounter at Augusta National.

Welcome to the Monday Finish, where we’re working on our ball speed…and looking at timeshares in Mesquite. Let’s get to the week!

There are probably fewer than 50 golfers in the world whose caddie employment changes would merit a headline. There might be fewer than 25. But this week we had two newsworthy breakups: Justin Thomas ending his relationship with longtime looper Jimmy Johnson (and picking up former Phil Mickelson caddie-turned-NBC analyst Bones Mackay), followed shortly thereafter by the break between Bubba Watson and Ted Scott.

Why do players and caddies split? A hundred reasons, but really just one: To change the status quo. To shake things up or reset them. There are all sorts of different services a caddie can provide — friendship, counseling, information, arithmetic, advice, silence — but different players have distinctly different checklists. Sometimes players don’t know what they need from their caddie. Sometimes a caddie takes a week off and his player wins with a replacement. Caddying is important, to be sure. But there’s no reliable formula. It’s math and it’s science but it’s definitely dark art, too. And because we’re in golf’s micro-offseason, this is a natural time for players and caddies to go their separate ways.

It’s tough to know if there’s more to the story with either pair. Thomas went out of his way to make it clear the split was not a firing. Firing or not, I don’t think there’s anything particularly salacious in either story. Thomas is looking to get the most out of his game after a (relatively) down year and has a good chance to do just that with pro jock MacKay on the bag. Watson thanked Scott — who endured his fair share of on-air beratement over the years — for making him a better person. He hasn’t announced a replacement yet.

Some players stay with caddies their entire careers, entering golf lore as iconic duos. Others ping-pong around and change caddies like calendars. It’s interesting to think about which caddie switches would cause the biggest stir. Jordan Spieth and Michael Greller? Dustin Johnson and his brother Austin? Rory McIlroy and Harry Diamond? Most of the Tour’s highest-profile pairs seem like they’re here to stay. And we’ll see what Bones’ tenure with Thomas has in store. Good things, I’d expect. But I’ll miss his insights on NBC’s broadcasts — he was terrific.

Kyle Berkshire won the event with arguably the most fanfare this week: The World Long Drive Championship in Mesquite, Nev. His actual victory was overshadowed by his pal Bryson DeChambeau, but Berkshire re-established himself as the longest man on turf with a 422-yard bomb in the final, just enough to edge out opponent Justin James at 418.

Sam Burns won the Sanderson Farms, this week’s PGA Tour stop in Mississippi. Quite the consolation prize for being left off the U.S. Ryder Cup team. Burns is now up to No. 18 in the world and seems to be realizing the full extent of his powers.

Celine Boutier fired a final-round 63 at the ShopRite LPGA Classic to rally from five shots back to take the clubhouse lead at the Bayside course at Seaview in Galloway, N.J. She then dodged several short birdie looks from her closest competitors, three of whom finished a single shot back.

Danny Willett is another player who was on the outside looking in at this year’s Ryder Cup, but began his campaign for the 2023 team in style with a win at the Dunhill Links and shared his feelings afterwards.

And Maja Stark won for the second time in three starts on the LET’s Estrella Damm Ladies’ Open, making it even more obvious that we’re watching a star on the rise. Buy some Stark stock while you can.

Moral victories all around.

Bryson DeChambeau didn’t win but made it to the final eight at the World Long Drive, gaining the respect of his competitors in the process. He also made good on his promise to highlight the talent of the behemoth bashers around him, including Berkshire, James and Martin Borgmeier. Between a stellar showing at the Ryder Cup and a captivating performance in Mesquite, it’s been quite the couple weeks for DeChambeau. Best of all, he seemed to find kindred spirits in the desert, per reporting from our James Colgan, who was on the ground.

Nick Watney finished T2 in Mississippi. If your reaction is, “Ah, Nick Watney! He’s good!” then you’re right. You were right, at least. But he hasn’t been particularly good recently. Watney missed 18 cuts in a row at one point last season and plummeted down the world ranking as well as the FedEx Cup. Rather than lose his card, Watney cashed in on the one-time exemption he gets for being in the top 50 in career earnings on Tour (he’s no. 50, exactly) and immediately took advantage. “That was, man, an amazing kind of lifeline,” Watney said on Sunday night, speaking of the exemption. Credit to him.

Two Korn Ferry graduates, Sahith Theegala and Cameron Young, each held the Sanderson Farms lead on Sunday before coming up just short. Theegala made bogeys at 10, 11 and 13 to finish T8 while Young made a mess of the par-5 14th, walking away with bogey while Burns made birdie just behind him. He finished T2, one shot back. We’ll hear plenty from both of these guys in the immediate future.

In New Jersey, three LPGA stars — Brooke Henderson, Jin Young Ko and Inbee Park — tied for second at 13 under, one shot behind Boutier. But sometimes second feels like a reward and sometimes it feels like a failure. Henderson shot 64 and birdied her last hole. That’s one way. Ko and Park entered the final round tied for the lead and stalled out on the back nine before each missed short birdie putts at 18, handing Boutier the win in regulation time.

Brady-Manning at Augusta — with Rory?

Tom Brady‘s return to Foxboro last night coincided with the release of Seth Wickersham‘s book, It’s Better to Be Feared: The New England Patriots Dynasty and the Pursuit of Greatness. The book, which centers on the trio of Brady, Bill Belichick and Robert Kraft, officially comes out next week — but Wickersham is doing publicity this week. And in his appearance on the Bill Simmons Podcast, Wickersham resurfaced a terrific story about Brady’s encounter with Rory McIlroy, Peyton Manning and Eli Manning at the Augusta National gym in 2015. Here’s how he recapped the story:

“And Rory is like, ‘Oh my God. How many Super Bowl MVPs and league MVPs are in this teeny little gym that nobody uses? He’s like, I’ve gotta get out of there. And for the next 40 minutes it’s Tom Brady, Peyton Manning and Eli Manning all in the same teeny little gym working out. And the Mannings, their regimen is completely different than Brady. Brady’s just working out with rubber bands, doing stretches, very TB12 stuff. And the Mannings were kind of watching him, trying to steal for tips. Those guys are all friends, but this was all business. They barely said anything to each other for those 45 minutes. Then Brady left, he was like, ‘I’ll see you guys out on the course.'” (You can hear the entire interview here.)

McIlroy was there for a weekend with his dad, he said at the time. He recounted the run-in with the QB bloc the following week when he spoke to media at Bay Hill ahead of the Arnold Palmer Invitational.

“To see them putting so much into it even after 15 successful years as a career and they’re still doing it — it was great for me to see, it was inspirational in some ways … It was just nice to be in that little world for a couple of days and experience it.”

The U.S. Ryder Cup team did its part in introducing College Gameday guest picker Harris English. And the video was … almost good? Like, on paper it was good. In reality it’s fairly awkward, with little extra bits of silence at the start of each clip and a bit of a strange cadence to the whole thing. Phil Mickelson is built for this, DeChambeau actually had a decent drum roll and Daniel Berger tossing to a paper-bagged Brooks Koepka was funny. The rest? Well, you’ll see what I mean.

We’re bracing for the soggy season but aren’t quite there yet, which means there are a few weeks left of proper golf, fall foliage and enough daylight that it’s worth celebrating still. Then it’ll be time to start thinking about booking winter trips to warm places …

I have a handful of places I’m determined to play before the Seattle wetness truly sets in, perhaps first among them Gold Mountain, which is high on our list of America’s best munis. When I make it, I’ll let you know.

Brooks Koepka, Harris English and Scottie Scheffler lead the U.S. Ryder Cuppers in action at the Shriner’s Children’s Open at TPC Summerlin. Perhaps just as intriguing will be Patrick Reed‘s first start since the Cup — and what he says about watching his countrymen play.

The LPGA heads to Mountain Ridge, a terrific club in northern New Jersey, for the Cognizant Founders Cup. Ko is the event’s defending champ and she’s on an absolute tear, with two wins and a runner-up in her last six starts as she tries to reclaim the No. 1 rank from Nelly Korda.

3. Sergio spitting out his water.

I know, it was more than a week ago. But this was fun, and a reminder just how good the Ryder Cup was: