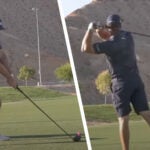 Bryson DeChambeau lit up the live stream at the World Long Drive Championship.

Check in every week for the unfiltered opinions of our writers and editors as they break down the hottest topics in the sport, and join the conversation by tweeting us @golf_com. This week, we discuss Bryson DeChambeau’s long drive experience, Justin Thomas’ caddie change and who should be an on-course broadcaster.

1. Bryson DeChambeau sent a charge into the world of long drive last week when he advanced to the final 8 of the World Long Drive Championship in Mesquite, Nev. What was your key takeaway from his performance?

Sean Zak, senior editor (@sean_zak): That it was as healthy a week as Bryson has had in a long time. He’s been a bit battered in recent months by things out of his control, and other things he has definitely inflicted on himself. This week in Nevada felt like the best week of his year. Smiles all around. Praise all around. At least that’s what it seemed like from afar. James Colgan captured it quite well for GOLF.com.

Josh Sens, senior writer: Exactly. The striking thing wasn’t that he advanced so far. It was how at ease he looked, and how welcomed he was. On the Tour, he often seems to be working so hard for acceptance. This past week, he was like one of those quirky characters finding a home on the Island of Misfit Toys.

Michael Bamberger, senior writer: How well said, Josh. An outsider finding his comfort zone, a long-ball hitter finding others with whom he can play, and who can play with him.

James Colgan, assistant editor (@jamescolgan26): That’s very kind of you, Sean! It was hard to leave Mesquite without reflecting a bit on the version of Bryson I saw. He was so stoked to be there, so happy to engage with everyone he met, so grateful for the time and the experience. The big guy gets a ton of heat publicly (a lot of it entirely justified), but man, the long drive was a breath of fresh air I’m not sure he realized he needed.

2. DeChambeau’s appearance had vast reach, driving hundreds of thousands of viewers to the event’s YouTube live stream. Was DeChambeau’s immediate impact on the long drive scene more, less or about as impactful as you had been expecting? And what long-term effect do you suppose his success/support could have on a sport in desperate need of a boost?

Zak: About as impactful as I expected. Forgive me for sitting on the fence there, but we knew he’d cause a stir. We knew people would be tuning in to just see him. His impact might be felt further down the road if, say, Golf Channel dives into the TV rights again. Or some other provider. If Bryson just comes around to Long Drive once in awhile, it might not have sustainable effects for that corner of the golf world.

Sens: It’s a Catch-22. The sport needs a TV deal and sponsors to draw in viewers. But to lock up that TV deal and those sponsors, it needs help from a big draw like DeChambeau. If this was just a one-off for Bryson, I don’t see how it has a sustainable impact. If he makes more regular appearances, different story. But even then, the question I would ask is: has anything in the market fundamentally changed? Long-drive used to have a TV deal and it lost it. Why did that happen? Has anything changed that would make the next TV deal more sustainable, the sponsorships more enduring, whether or not Bryson is in the mix? I have no idea.

Bamberger: Chicks dig the long ball, or so the said the advertisement in less sensitive times. Fellas do, too. It’s always been that way. DeChambeau is sort of an outlaw, or at least marches to his own drummer. There’s a crowd for that. And it’s a circus act, not meant at all disparagingly. Circus acts are at the heart of the American experience.

Colgan: Considering the World Long Drive Championships just owned a week in the golf space, I’d say yeah, Bryson’s performance was pretty impactful. But the path forward to legitimacy isn’t any more clear now than it was last Sunday. There are hard questions about how to make the sport self-sustaining, let alone profitable, that are still unanswered. But I think the hope of many within the sport (including Bryson), is that his performance could spur interest from the rest of the pro game.

3. What did you learn in recent days about professional long drive that you didn’t know a week ago?

Zak: That the wind direction really, really matters. Of course it was always going to matter for distance, but it matters more than just about anything for spin rates on balls struck with 220 mph ball speed. Definitely an oversight for me!

Sens: The wind, for sure. But also the variables of the grid itself. Like golf courses, they all play differently, with some slots that run out better than others. It’s not just about bombing it. It’s also about the nuances of ground game.

Colgan: I learned that long drive as a sport is being propped up by a (mostly) benevolent group of diehards, including a large chunk of the current playing population. I also learned that more than anything, they’re tired of being a golf sideshow. They want to be recognized as more than an entertainment product. A bonus: gas station Mexican food in Mesquite, Nev. is not only trustworthy, but also delicious.

4. Shane Lowry’s lingering Ryder Cup frustration boiled over last week when in an interview with Irish bookmaker Paddy Power he criticized the U.S. team for riling up the crowds at inappropriate times and complaining about unconceded putts. Any merit to Lowry’s beefs?

Zak: I don’t think so. The reasons why Shane Lowry gets extremely excited at the Ryder Cup are the same reasons that raise the stakes, that imply the pressure, and increase the antagonism. You can’t have one without the other. There is always a line between what is okay and unfair, but if Lowry really had a problem, he could have addressed them on-site. Better then than days later, across the pond, looking forward to 2023.

Sens: It depends what actually happened. Sure, testiness and antagonism and partisan crowds are all part of the Ryder Cup. But Lowry’s main beef wasn’t about the usual stuff.  It was his perception that Patrick Cantlay was riling up the crowds against him as he was trying to putt. I don’t know if that really happened. If it did, Lowry absolutely had a right to be peeved — so much so that he should have addressed it right then and there with Cantlay. As for unconceded putts, it’s bush league to complain about them in the Ryder Cup and pretty much everywhere else. Anyone who gripes about an unconceded putt is oblivious to the irony. If you really think it’s a guaranteed make, then what’s the issue? Shut up and knock it in.

Colgan: It’s always a little bit easier to complain after you’ve been handed a shellacking. I didn’t notice anybody crossing a line from my couch in New York, which isn’t to say it didn’t happen, but only that if it did happen, it wasn’t obvious. Still, I like Lowry as a Ryder Cup heel for the Euros — he played that role well last week.

Bamberger: Eh. A few American players were over-the-top. From what I saw of Cantlay, he was not among them. NEVER even comment on somebody not giving you a putt. It’s like complaining about your stocking stuffer. If you get something other than a three-pack of socks, consider yourself lucky. If you get nothing, there’s a reason.

5. After four years of pounding the fairways for NBC Sports and Golf Channel, Jim “Bones” Mackay is returning to caddying, picking up the bag for world No. 6 Justin Thomas. Does it surprise you to see Bones rejoining the looping ranks, and how much of an impact can a veteran caddie like him have on a well-established player like Thomas?

Zak: Not surprising at all. Bones is a caddie at his core, even when he’s reporting for NBC. Thomas could be the best player of his generation, so how do you pass it up? Bones is in great shape and can add to his own legacy with a player he knows well. As for JT, he already had a veteran caddie. Bones is another great one. The real winners are TV viewers who get to hear their conversations on the broadcast. Bones has always been good for that.

Sens: No surprise, for all the reasons Sean lays out. As for any benefits — is he going to be getting better yardages, better reads? Seems unlikely. But it can’t help but change JT’s mindset, and in golf, as we all know, that can make all the difference in the world.

Colgan: Certainly not a surprise, but a major bummer for those of us who’ve grown to love his insight every week. He really was the closest thing the pro game had to a Tony Romo-type analyst. I’ll miss him in that role.

Bamberger: His TV work was very good and getting better and better. Mackay knows the game deeply, understands the subtleties of lie and wind and mood. All the things that made him good on TV are what will make him a valued caddie to Thomas. I hope things are OK with Thomas’ now former caddie, Jimmy Johnson. A gruff exterior and a generous interior. He did the job quietly and professionally. Never saw him even close to center stage.

6. Mackay will continue to work some shifts for NBC/Golf Channel when his schedule allows but his departure will presumably require backfilling. Who would like to see take the reins as an on-course analyst?

Zak: I hate to piggyback so simply off Thomas’ thoughts, but Colt Knost really is the right answer, it seems. The man is endlessly connected with the modern Tour. He puts things plainly and injects humor at appropriate moments. After a week listening to the SkySports broadcast and appreciating the banter between hosts, analysts and on-course reporters, I’d love to see more of that on the NBC airways. Knost would be my first hire.

Sens: Humor would be good for sure. I hope Larry David is up for the gig.

Bamberger: Colin Montgomerie. As a warm-up act for a booth gig. One of the funniest and most insightful people in golf.