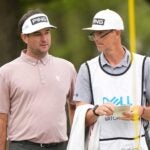 Justin Thomas wasn’t the only major-winner to announce an end to his caddie partnership Thursday. Bubba Watson did as well.

Watson will no longer have Ted Scott as his caddie when he tees it up next on the PGA Tour. The duo had been together for 15 years, winning multiple Masters titles in the process. But now Watson will move forward with someone else on the bag (he has yet to announce a replacement).

Watson tweeted out a medley of photos of their accomplishments together, along with the touching explanation below.

“After 15 incredible years together, Teddy and I have decided to end our on-course partnership. We recently came to the decision after some deep talks, not only about golf but life. When we met I don’t think we ever imagined how much we would experience together. Teddy deserves more credit than anyone can imagine for our success on the golf course, but I am just as grateful for his friendship and the way he has helped me grow as a person.

@jtedscott thank you for having my back for the last 15 years. It has been a blessing and a privilege to have you by my side. I know you’ll do great things whether it’s coaching, caddying or regaining the World Foosball Champion title. I’m excited to see and support whatever comes next for you my friend.”

Watson’s caddie change could become public knowledge very soon as he tends to play fall series events on the PGA Tour. Watson is not in the field this week at the Sanderson Farms event, but he often plays in the Shriners Children’s Open or the CJ Cup, both of which will be held in Las Vegas in the coming weeks.