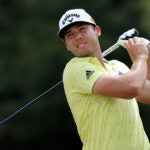 After starting the 2021 calendar year as the 154th-ranked player in the world, Sam Burns won again Sunday at the Sanderson Farms, elevating himself to 18th in the world, just weeks after he was passed up for a Ryder Cup captain’s pick.

Burns entered the third round in Jackson, Miss. three shots behind the lead, but used a stretch of 12 birdies in 24 holes on the weekend to push him above the rest of the field. All that remained were a trio of par-4s to seal off his second career win, and second win of 2021. Two pars, one bogey, not much pressure from the field.

“I saw the leaderboard when I was on 17 green and I kinda thought the guys behind us weren’t quite close enough to catch us,” Burns told Golf Channel. “Just not enough holes. That’s when it kinda hit me that if I could just get it up there around the green and make a four or a five, we could do it.”

He wasn’t wrong. As for the rest of his tournament, well, sometimes the numbers just speak for themselves. Burns not only led the field in Strokes Gained: Off the Tee, he also finished second in the field in Strokes Gained: Approach. The best player driving the ball and the 2nd-best approaching the green. You do that and you’ll need some horrible luck (or horrible putting) to not raise the trophy on Sunday.

Burns actually led the field in SG: Approach until the last iron shot he hit Sunday — a weak push that landed in a greenside bunker. But nursing a 2-shot lead at the time, it was a casual bogey that earned him the one-shot win and tournament scoring record at 22 under.

The win for Burns follows a year in which he has contended constantly. He led for much of Sunday at the Genesis Invitational back in February before finishing third. He won the Valspar Championship in April, and nearly won two weeks later in Fort Worth, finishing second, before losing a three-man playoff to Abe Ancer at the WGC-FedEx St. Jude. It has been a season of steady, constant growth for Burns, resulting in him becoming one of the best golfers in the world.

“The main thing for us was we knew what our gameplan was,” Burns said Sunday. “We knew we had a purpose for each shot. We were just going to stick to it. Whatever happened at the end, if we needed to make a couple birdies the last couple holes, we would try to do it.”

The golf before then was so good he didn’t need to.