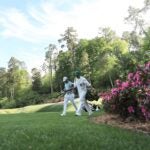 Xander Schauffele walks to the 13th fairway at Augusta National during the 2019 Masters.

Will, when and should the 13th hole at Augusta National ever be lengthened? Those have been key Masters talking points for years, although recently we’ve gotten some clarity.

For starters, Augusta National bought land behind the par-5 13th tee from neighboring Augusta Country Club back in 2017. That’s when speculation really started to skyrocket, and for good reason. Then, in January 2020, photos surfaced of a service road being built behind the 13th tee box. The project was officially underway. Then the question simply became: when will the new tee be ready?

We might have an answer now. Likely not this year.

David Dobbins, the man behind the Eureka Earth Twitter account who snaps aerial photos from a plane, shared a picture of the 13th tee area on Friday, which he said was taken on Monday. “It appears it’s time to press pause on the ANGC No. 13 tee discussion — at least for now,” he wrote.

My colleague Dylan Dethier touched on this two weeks ago after some new photos surfaced, and the same holds true with this newest snap: the regular tee for the 13th looks Augusta green, while the presumed new tee area behind it looks like there’s still some work to be done (not to mention lots of trees to remove).

While it’s worth reminding that Augusta National can work wonders — the course went from brown and dormant to lush green seemingly overnight earlier this month — the safe bet might be that the new 13th tee won’t be unveiled until April 2021, at the earliest. That said, Augusta National has surprised us before. We’ll find out for sure in less than four weeks when the 84th Masters officially begins.

Lock in your game with GOLF’s Pro Shop The incredible story of Jim Nantz's first round at Augusta National