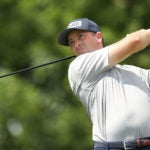 Michael Thompson hits his tee shot on the 11th hole at TPC Twin Cities on Sunday.

Michael Thompson stood over his third shot on the par-5 18th hole at TPC Twin Cities on Saturday. His first stroke had found the water. His second was the penalty. His previous swing was a tap-in for bogey on the 17th. He was leading the 3M Open at that moment. He was leaking, too.

Thompson grabbed his fairway metal from his bag.

“Time to step up. Play the game,” his caddie, Damian Lopez, told him as he walked toward his ball.

Thompson cleared the water. He made his par. He entered Sunday tied for the lead.

Time to step up. Play the game.

“This has been my dream ever since I was 7 years old, to play on the PGA Tour,” Thompson said. “It was a shootout today. I mean, anybody could have won. It just means the world to me because it solidifies in my mind that I’m one of the best golfers in the world and that I can compete every single week out here.”

He played the game.

“Oh, man, it’s job security for two more years, it’s benefits of the sponsors that I have, and it gives me the confidence to know that I can compete on the biggest stage in the world in this game and that I can do it again,” Thompson said. “To have the opportunities to play in some of the bigger tournaments, to finish the year and put myself in a chance to make Atlanta (for the Tour Championship), I’ve never been in a better position, I think, than right now on the PGA Tour. Man, I am champing at the bit to go prove myself again really.”

Before Thompson stepped up, he tripped. Three-putt on the 3rd. Bogey. Tony Finau was the leader.

He birdied the 5th to move back into a share of the lead. He birdied the 6th to take his first outright lead. He won the tournament on the final three holes.

He took the outright lead for good on the 302-yard, par-4 16th. He followed a drive in the left greenside bunker with a 36-yard sand shot that trickled to within 3 feet and an eventual birdie. He protected the lead on the 171-yard, par-3, 17th. He managed the water protecting the hole and two-putted for par. He won the tournament on the 599-yard, par-5 18th. Drive down the middle. Lay-up second shot. Approach to within 15 feet. Then a birdie when all he needed was a par.

“To hit those shots coming down the stretch, those last two holes are not easy,” Thompson said. “I mean, you’ve got to step up and hit a good tee shot and even the layup you’ve got to hit a good shot, and then to put myself in a position to have a 15-footer where all I have to do is lag it up there, uphill right-to-left putt, I mean, I couldn’t have asked for a more perfect scenario to finish a tournament. To see that go in was just relieving.”

Thompson and Richy Werenski led to start the day. Finau led outright at one point. Adam Long had a share of the lead at various points. All 10 players who finished at least three shots back all shot under par; nine of the 10 shot under 70. Thompson wasn’t the only one to step up.

Matthew Wolff, the defending champion, was in the group five shots back.

Finau hadn’t won since the 2016 Puerto Rico Open, also his first victory. He had finished in the top 10 without winning 29 times, the longest streak on Tour.

Finau birdied 2 and 3 to take the lead. He held a share of the lead after a birdie on 10. He lost the lead after Thompson, playing in the group behind him, also birdied 10. Finau shot even-par from there.

“I had some great looks down the stretch,” he said. “I didn’t make the putts I needed to.”