Mayakoba Golf Classic: 3 things to know after Round 3 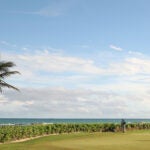 One of the contenders said he’s “trying to birdie every single hole.” He birdied half of them. He fell short. But he rose up the leaderboard. Here are three things you need to know after Saturday’s third round of the Mayakoba Golf Classic at El Camaleon Golf Club in Playa del Carmen, Mexico.

The leader has made a number of birdies this week, too.

Emiliano Grillo made seven in the first round and nine in the second, then added five in the third for a three-under 68. He’s at 16 under and leads by one shot over Tom Hoge, two shots over Viktor Hovland and three shots over Adam Long.

“Any day is the same: You’ve just got to go and play your best and try to beat everybody else,” Grillo said. “That’s the plan every day. I mean, everybody grinds for that.”

Which was half of the number of birdies he expected to make.

“I try not to get wrapped up in where I’m at or what I’m doing,” Thomas said. “I’m trying to birdie every single hole. A course like this, as easy as it can play when you get the ball in hand, as soft as it is, if you know how far you’re hitting your irons or wedges, the ball is going to stay right where it lands, especially with no wind like yesterday and today. So I feel like I can use that to my advantage.”

Several are within striking distance

Hoge shot a six-under 65 and is one shot behind. Hovland and Long also made nine birdies on their way to 63s and are two and three strokes back, respectively.

Thomas is four back, as is Patrick Rodgers. Five back are Lucas Glover, Russell Knox, Aaron Wise and Tony Finau, and six behind are defending champion Brendon Todd, Joaquin Niemann, Carlos Ortiz and Joel Dahmen.