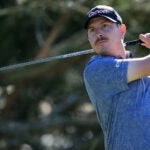 Joel Dahmen shot a three-under 68 on Thursday at the Mayakoba Golf Classic.

Joel Dahmen stood over his ball on the 360-yard, par-4 11th hole at El Camaleon Golf Club. He waggled his club and looked up at the pin, less than 100 yards away, put his club and head back down, then looked up one last time. He swung.

“This is a short par-4. Hole location today on the left portion of the green so good angle for Joel,” the commentator on the Golf Channel said during Thursday’s broadcast of the first round of the Mayakoba Golf Classic.

“He’s calling for it to go in,” the commentator said.

Narrator voice: It did not go in.

It did not go on the green.

It dropped about 20 yards short and left of the flag.

“Yeah, you think?” another commentator said amid laughter.

Dahmen’s third shot also fell short of the green. From there, he pitched on and made bogey. After shooting five-under on the front nine, Dahmen made two bogeys and no birdies on the back for a three-under-68 round. A good round.

Dahmen’s been on a bit of a humor heater, too.

Before the U.S. Open in September, he shared on Instagram his “perfect” scripted outfit for all four rounds – he had photoshopped his face atop two “Saturday Night Live” characters’ wardrobes, the “Borat” “mankini” and Chevy Chase’s character in “Caddyshack.” During the Zozo Championship in October, he spoofed other pros’ distance training, writing on Instagram: “The quest for 170 begins today.” Also at the Zozo, he re-enacted a scene from “Gladiator” in front of spectators at nearby houses after he rolled in a birdie putt.

“Are you not entertained?” he yelled.