Dustin Johnson and … Patrick Mahomes? Here are golf’s 10 surprising winners of the week 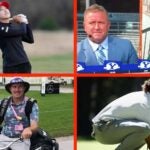 Golf's winners aren't just the folks that hold up the trophies.

You’ve already heard about the golfers who won the actual golf tournaments — but that’s just a lucky few, and we all know that there’s much more to golf than who ends up with the lowest score. With that in mind, here are this week’s 10 other winners. They deserve your attention, too.

1. Dustin Johnson (and his Gameday tie)

Johnson skipped this week’s event at Mayakoba because, translating his statement loosely, he’s doing just fine without it, thanks. In his last seven starts, Johnson shot 30 under, regained the world No. 1 ranking, posted three top-6 major results, won the FedEx Cup, earned over $20 million, claimed that green jacket and changed his legacy forever. What have you been up to since August?

Say it with me: It’s a good time to be Dustin Johnson.

Then again, it’s always a good time to be Dustin Johnson. He’s a winner again this week.

2. Joel Dahmen (and his entire vibe)

Let’s buzz through Dahmen’s week, shall we? On Thursday, he gave us two brief moments of joy. There was the air-followthrough and the sarcastic, “Go in.”

That smirk at the end said it all. In Sunday’s final round, Dahmen kept the split-handed putting going and broke out the Hawaiian shirt-bucket hat combo. Combine with the mustache and resort bicycle and you’ve got quite the look.

Better yet, he got an in-person audition for U.S. Ryder Cup captain Steve Stricker. Stricker beat him on the day, shooting 67 to Dahmen’s 69, but he left the week with a top-20 finish and a few extra fans.

Angela Stanford was the LPGA Tour’s big winner this week, taking down the Volunteers of America Classic in an emotional victory at her home course. But an exciting subplot was Yealimi Noh, a rising American star who finished in a share of second place.

What’s all the hype about? Well, Noh is only 19, she leads the LPGA Tour in birdies and she seems to only just be scratching the surface of her potential. Check out that smooth, simple, powerful golf swing:

Yes, you’re well aware of Oklahoma St. grad Viktor Hovland’s victory at the Mayakoba Classic. But did you know that his would-have-been teammate, Austin Eckroat, finished T12 — and he’s still an amateur?

Eckroat’s PGA Tour debut came at the 2019 U.S. Open, where he missed the cut, but this weekend felt like his real coming-out party. He capped off his week with a six-under 65 on Sunday to beat nearly all the pros. Seems safe to say he may have a future beating even more of them.

5. Mackenzie Hughes (and his plans for April)

Mayakoba marked the final full-on PGA Tour event of 2020, which means we now know more about who will be playing in the 2021 Masters. Rickie Fowler missed the cut at Mayakoba, which means he’s outside the top 50 and has plenty of work to do (either by winning a tournament or playing his way back inside that top 50 by March) to punch his ticket back to Augusta.

As for Mackenzie Hughes? He started 2020 by missing five cuts in a row but finished the year in style, sitting at lucky No. 50 in the world and all the rights, privileges and responsibilities appertaining thereto. Including a trip to the Masters.

6. Golfers with the last name “Bezuidenhout” (both of ’em)

The title of this particular section started off as a joke because it seemed unlikely that any other golfer would have a surname with quite the same Scrabble power as Christiaan Bezuidenhout. But a cursory scan of golf’s world rankings revealed that another young South African named Theunis Bezuidenhout is No. 1224 and won the 2019 Big Easy Championship, so shoutout to him. (No relation, from what I can tell, between Christian and Theunis, but I am happy to be proven wrong.)

Christiaan Bezuidenhout, though, sits slightly higher in golf’s world rankings thanks to back-to-back wins at the Dunhill Links and the South African Open. Two weeks! Two wins! If that sounds like some consistently good play, well, you don’t know the half of it: Bezuidenhout shot 69-68-68-69 last week and 67-67-67-69 this week, which means that he’s shot between 67 and 69 in eight consecutive rounds. Folks, even Elvis wasn’t that consistent from 67-69.

7. The Curse (and the curse-breaker)

As you can tell from the entirety of this column, some of the best bits of following golf come from the game’s fun, random minutiae, and The Puerto Rico Open Curse certainly falls under that category. What’s the P.R.O.C, you might ask? Basically, since the inception of the Puerto Rico Open as a PGA Tour event in 2008, no tournament winner had gone on to win another event afterwards — except, incredibly, Michael Bradley, who went on to win the Puerto Rico Open again.

It was only a matter of time before this statistical anomaly corrected itself; Tony Finau and Viktor Hovland are two of the best golfers on the planet and each had won the Puerto Rico Open but nothing else. On Sunday, an eight-hour Carribean flight from Puerto Rico, Hovland broke the curse. Is that good news for Finau, Martin Trainer, Chesson Hadley and others? We’ll find out in 2021.

Tiger Woods’ 1997 Masters victory might be the most famous individual win in golf history, and the 21-year-old set a load of records in the process. One that seems unlikely to ever be broken was the ridiculous surge in golf participation that he inspired. Rounds played in 1997 were up 14.6% year over year, and no other year has come even close to matching that figure. Until this year.

According to the National Golf Foundation, rosy “rounds played” numbers show that golfers played a whole bunch more golf this year than last year. A whole bunch as in 50 million additional rounds and a 12 percent jump over last year. That’s a massive increase. It just can’t quite match the Tiger Boom. ’97 Tiger wins again.

9. Chiefs fans (for a bunch of reasons)

Steph Curry and Charles Barkley were new, fun additions to The Match series during their Black Friday showdown. Who might take their place next time around? How ’bout NFL superstar quarterback and defending Super Bowl MVP Patrick Mahomes? Executive producer Bryan Zuriff dished on some potential names on SiriusXM PGA Tour Radio this week, including the golf-mad QB:

“I love Pat Mahomes,” he told Drew Stoltz and Colt Knost. “He loves golf and I think he brings a young demo to this, similar to Steph Curry.  Maybe Tom [Brady] comes back. Maybe Peyton [Manning].  There’s definitely a lot of options there so we’ll figure it out.  But Pat is somebody we’re definitely talking to and he’s talking to us.  So we’re excited about the potential of bringing a guy like him to the fold.”

And yes, the Chiefs won on Sunday Night Football, too, because Mahomes remains very good at his main sport, too.

In the professional golf world, there’s nothing better than a major week, and even though we missed our typical spring-and-summer dates, we’ve happily made do with the replacement dates. The November Masters served as a Thanksgiving appetizer, and this week’s U.S. Women’s Open will work as the perfect holiday season lead-in. It’s a great week to showcase the very best in the women’s game, with no big-time PGA Tour event running in opposition. As a result, all eyes will be on Champions Golf Club in Houston — and on which golfers might crack this top 10 list next week.