Who should compete in a Match 4? One caddie has a suggestion 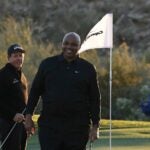 Peyton Manning, Phil Mickelson, Charles Barkley and Steph Curry battled it out in The Match 3 on Friday.

The Match is many things, but one thing it is not is rigid. Over the years, the made-for-television event has taken on many different forms, each to its own unique success.

In 2018, Turner Sports and Capital One billed The Match 1: Tiger vs. Phil as a prizefight. Tiger Woods and Phil Mickelson were to clash, head-to-head, to prove their own individual supremacy. The pair would play a fully legitimate match, mirroring the suspense of Sunday singles at the Ryder or Presidents Cup. The $10 million prize, celebrity-laden gallery and pay-per-view broadcast only added to the drama and pressure of the event, much in the same vein as a hotly contested boxing match.

In the late spring of 2020, The Match 2: Champions for Charity came with a different set of instructions. Now, the match would expand from two players to four, incorporate a pair of non-professional golfers (Tom Brady and Peyton Manning), and feature a mix of individual matchplay along with team play. The event would not solely line the pockets of its participants, but instead raise money for Covid-19 relief. All the while, it would take on a much lighter tenor, leaning into its celebrity characters (and broadcast).

Then again last week, The Match 3: Champions for Change changed its tune. This time, three celebrities (Manning, Steph Curry and Charles Barkley) joined one pro (Mickelson). Phil was no longer a stone-cold killer raking in cash, he became a golf instructor to Charles. And speaking of Barkley (who might be the world’s most famous bad golfer), gone were The Match’s days of shot-making prowess. Bonus money was dolled out for golfers who hit fairways and greens in regulation.

For The Match’s organizers, its malleability is a major asset. Heading forward, it can include whomever it chooses, and play by whichever set of rules it deems most valuable. Could that mean a series of singles matches between high-level PGA Tour stars? Sure! Could it also mean a four-hour brouhaha between Chuck and Shaq? Absolutely!

Naturally, more than a few golf fans hold ideas of their own for the future of the shape-shifting event. One of those golf fans, Ted Scott, wondered whether a Match 4 could include a new set of golf all-stars among its competitors: caddies.

Scott, who is a PGA Tour caddie himself, took to Twitter Saturday to share his desire to see pro caddies earn their way into the next Match.

“I’ll tell you what would make a good ‘The Match’,” Scott tweeted out. “Get a couple of caddies on the team. Golf fans would love it and there are some caddies that can play!! @PaulTesori is first on the list.”

Scott raises a valid point. Plenty of Tour caddies are bang-up golfers, and some even can trace their roots as loopers to their former careers as low-level professionals and/or high-level college golfers.

Tesori, Webb Simpson’s caddie, quickly jumped on board with the idea, as did the official PGA Tour Caddies twitter account.

Of course, there are plenty of hurdles to clear for the movement prior to the next Match, including whether Turner Sports is receptive to the idea of including a few of the PGA Tour’s finest loopers in such a high-profile event. But for our money, we can’t think of many celebrity matchups more intriguing than the ones presented by a player-caddie match.

Just picture Tiger Woods and Joe Lacava against Justin Thomas and Bones Mackay, Jim Furyk and Fluff Cowan, Phil and Tim Mickelson, or Dustin and Austin Johnson. The pairing opportunities are endless, as is the insight we’d glean from watching the pairs navigate a round together.

Maybe it won’t have the same Q-score value as Brady-Manning or Barkley-Curry, but a player-caddie battle in the Match 4? Now THAT’s must-watch TV for us.