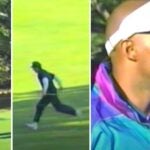 Charles Barkley's a good sport, but this prank must have put his patience to the test.

In golf, potential frustrations lurk around every corner. You can land in a divot, bounce the wrong way off a tree, skull a chip, lip out a putt, hit your ankle knocking sand out of your shoes… you get the idea. But by far the worst feeling in the game is losing a golf ball that you know should be there.

You know the feeling. You saw it land! It was just down the right side of the fairway! There’s absolutely no way it should have disappeared. The experience is enough to make your blood boil, wreck your scorecard with a nebulous lost ball and throw off the mojo of your entire round. That’s why the hidden-camera prank committed against Charles Barkley on the golf course in the 90s is one of the worst crimes these eyes have ever seen.

For context, Barkley and 76ers teammate Rick Mahorn used to host a show called Basketball’s Funniest Pranks. They could be ruthless, too — the pair once convinced J.R. Reid he’d been traded, and another time roped several NBA big-timers into “auditioning” for a disgusting Tabasco-infused “sports drink.” So Barkley was getting a taste of his own medicine.

Here’s the full video, followed by a breakdown:

“Charles is about to tee off for what he thinks is just another round of golf,” the narrator begins. “What he doesn’t know is that almost every time he hits a ball from the tee, our trusty groundskeeper will mysteriously appear, steal the ball and then disappear back into the bushes. The result? A thoroughly confused Charles Barkley and a caddie who is absolutely no help at all.”

That’s for sure. Barkley’s caddie appears to be in on the prank, and likely mic’d up, which is how we get audio of Barkley’s reactions.

“John, where’s my damn ball? This is unbelievable,” Barkley says. The show runs through a montage of Barkley’s balls being scooped up by their secret groundskeeper, who takes delight in the four-hour sufferfest he’s putting the NBA star through.

Were I the groundskeeper, I’d have a dose more fear. Barkley’s a deeply competitive golfer and a big-time gambler who has a big-time temper to match. It’s hard to imagine he’d take too kindly to a thieving course staffer. Barkley’s playing partner stays in character, too, holding tough on a number of rulings. No “leaf rule” or “just throw one down” coming from this group.

“Charles, I’m not giving you a free drop now,” says Neil, his playing partner — who I suspect is local CSN TV personality Neil Hartman, a playing partner and frequent friend of Barkley’s.

“That ball shouldn’t have been lost, Neil!” Barkley objects.

Who knows what more explicit lines may have been cut in post-production. Even the sanest golfer would have been driven mad by an unknown number of mysterious disappearing tee shots, not to mention one of the world’s most famously competitive athletes. It’s a wonder they kept filming to the 18th hole, at which point everybody must have been relieved to break the news to Chuck that he’d been pranked.

It’s hard to know exactly how high tensions must have been running when Hersey Hawkins, Barkley’s former teammate, bursts out of the woods holding a handful of Barkley’s lost balls.

“Hey Charles!” he yells, cracking up laughing as he jogs in from behind the green. “Did you lose any balls out there? I just happened to be walking the course and I found all these balls!”

It’s an awesome moment where the tension breaks; Barkley realizes he’s been had. Afterwards, he declares war.

We’d support him if he still held the grudge today.

1. Barkley’s swing looks terrific! Nothing at all like the hitchy stop-and-start move that has gained him infamy in recent years. This is the sort of swing that Michael Jordan has said used to produce rounds in the mid-70s. It’s worth wondering if the cruelty of this prank alone was enough to scar his game for all eternity.

2. My biggest unanswered question is just how many golf balls Barkley lost — some of the cheeky groundskeeper scenes look like they were probably reenacted, so it’s tough to tell. I’ve already emphasized this point, but losing that many golf balls in plain sight during a round of golf would send anyone to madness.

3. Barkley seems comfortable getting crowded on the tee box. Look just how close Neil gets on his opening tee shot!

4. There’s a fearless punchout at the 2:15 mark that feels telling. I’m not here to say that Barkley was ready to turn pro, but that’s a golfer who looks wholly comfortable on the course — lost balls aside.

5. Barkley’s windbreaker, the height of ’90s NBA fashion, may deserve its own story. Teal? Check. Purple? Check. Pink? Check. Pair it with an oversized Ping visor and this is a look that never should have gone out of style.