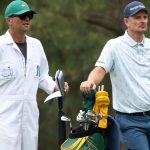 Justin Rose was on fire during his opening round at Augusta National.

Day one of the Masters is officially complete, and what a day it was. Although there is no Tiger Woods at Augusta National this year, the tournament still has plenty of intrigue as players vie for the green jacket for the second time in just five months, and the rest of the tournament should be packed with storylines as well.

Here are six things to know ahead of Friday’s second round.

Players have talked all week about how difficult Augusta National would play this week, and Round 1 showcased that to the utmost. Just 12 players broke par on the day, and only three of them were able to post rounds in the 60s.

After the birdie-fest that was the November Masters, Augusta National seems to have brought the course back to its firm and fast conditions, and the scores for the day illustrated that. If Thursday was a preview of things to come, watch out for even more big numbers the rest of the weekend.

While much of the field struggled in Round 1, Justin Rose was in total control of his game. The two-time Masters runner-up shot 65 on Thursday and holds a four-stroke lead over second place.

Rose’s round started off like many others in the afternoon as he posted two bogeys and no birdies through his first seven holes, but from there on into the clubhouse, he was red hot. The Englishman made seven birdies and an eagle over his last 12 holes to take a comfortable lead into Friday.

If he can keep his foot on the pedal in the second round, this could quickly turn into a blowout.

With such power in his arsenal, Bryson DeChambeau looked to be a favorite to claim the green jacket coming into the week. But despite his distinct length advantage, Round 1 was a bit of a struggle for the U.S. Open champion.

DeChambeau was only able to post 76 in the opening round, so he’ll head to Friday 11 strokes behind Rose’s lead. He’ll need to dial in his game quickly on Friday if he hopes to get back into contention before the weekend.

Tommy Fleetwood might not have had his best stuff on Thursday, but he still came away with something to smile about after carding an ace at the par-3 16th. Fleetwood took dead aim at the flagstick on the famed par 3 and jarred his tee shot after a couple of bounces, sending roars through Augusta National for the first time in nearly two years.

Fleetwood posted a two-over 74 on Thurday and will need to make a move on Friday to get back within shouting distances of the lead.

Two years ago, Will Zalatoris didn’t even have Korn Ferry Tour status. Now, he’s in contention at the Masters.

The 24-year-old had never played a competitive round at Augusta prior to this week, but he showed no rookie nerves in his debut. Zalatoris made three birdies and an eagle on Thursday on his way to posting two-under 70 that leaves him T4 and five shots behind Rose’s lead.

If he can play as well as he did on Thursday the rest of the way, anything is possible.

6. Spieth has rollercoaster round

Jordan Spieth’s opening round at the Masters was nothing if not memorable, and it had a little bit of everything.

Spieth posted a 71 on Thursday, but the final score doesn’t tell the entire story. The 2015 Masters champ made three birdies, one eagle, one bogey and an adventurous triple bogey on his way to that score.

Only four players have made a 7 and gone on to win the Masters, so if Spieth becomes the sixth, he will join some pretty rare company. The good news is, after his triple bogey, Spieth played three under the rest of the way to put himself in excellent position to chase down the lead.

The Spieth rollercoaster is back.

Check out these popular items in our Pro Shop

2022 American Express live coverage: How to watch Round 4 on Sunday