WATCH: Jordan Spieth’s aggressive line from trees backfires terribly in Round 1 of Masters 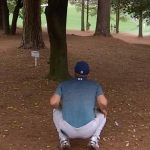 Jordan Spieth surveys his second shot on the par-4 9th hole on Thursday at Augusta National.

Jordan Spieth was off to a good start in his opening round of the Masters on a tricky and fiery Augusta National on Thursday, but a lapse in judgement, or perhaps execution, cost him big on the par-4 9th hole.

Spieth, one under after eight holes, shuffled to the left side of the tee box on 9, setting up to hit a draw. The only problem is the ball didn’t draw. Deep in the pine straw well right of the fairway, Spieth and caddie Michael Greller had about 171 yards remaining and went into a lengthy discussion about their route through the trouble.

Spieth decided on the more aggressive line — and then, clank. It ricocheted off a tree and went farther behind him, leaving 182 yards to the green.

Spieth, with an easier out this time, punched through and walked up toward the green.

“Honestly, I just think that was the wrong decision,” said Colt Knost, the on-course reporter with the group.

Spieth faced an up-and-down from the front of the green to save bogey — which would have been a good score considering the second-shot error — but he missed a quick five-footer on the low-side and then missed the five-foot come-backer coming up the hill.

“Oh boy, what a disaster for Jordan Spieth,” Knost said. “That is going to be a triple-bogey 7 — with no penalty strokes.”

The 7 dropped Spieth to two over for the round and six off the lead, but in classic Spieth fashion he birdied the difficult par-4 10th to get back to one over.

You can get the latest updates from Round 1 at Augusta here.