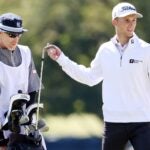 Will Zalatoris at the U.S. Open at Winged Foot.

The 2020 U.S. Open was the week a bright, young player established himself as one of the game’s most intriguing talents.

No, I’m not talking about Bryson DeChambeau. I’m talking about Will Zalatoris, the No. 1 player on the Korn Ferry Tour who finished T6 in his first major as a professional.

Powering Zalatoris’ performance was an impressive display from tee to green: The 24-year-old led the field in Strokes Gained: Approach, gaining 7.97 shots with his irons over the course of the week. If you watched closely you may have spotted him returning to one shoot repeatedly: a little knockdown. It was the shot he used for his hole-in-one on Thursday, which you can watch below.

It’s become a go-to shot for Zalatoris over the years, which he perfected playing in Texas.

“Growing up in Texas, I got used to playing in a lot of winds,” Zalatoris says. “Over time I got used to bringing the ball down and controlling the trajectory.”

How do you hit it? According to Zalatoris, it comes down to four simple things:

A pretty simple formula, and if it’s good enough for one of the most talented ball-strikers around, it’s worth trying yourself.