6 ways a November Masters will be different than April, according to experts

Hello, friends. Is it just us, or is it quieter and cooler than what we’ve grown accustomed to around these parts? And what’s with the landscaping? Why so few magnolia blooms on Magnolia Lane?

Springtime in Augusta feels different this year. Maybe that’s because it isn’t really springtime. The tradition unlike any other has broken with tradition. For the first time in its history, the Masters is being held in the fall.

The tournament remains an invitational, its field a select group of top pros and amateurs from all six continents on which the game is played. The winner will still receive a green jacket, not a green cardigan in deference to the season. Augusta National chairman Fred Ridley is expected to preside over the opening proceedings, with Jack Nicklaus and Gary Player smacking ceremonial drives into the autumn air. For those craving familiar comforts, the 2020 Masters will deliver plenty of them. But golf’s cherished annual rite will also come with wrinkles in its sights and sounds and shot-making demands. There will be no fans, for instance, and not nearly as many flowers. But what else?

In anticipation of this unprecedented major, we’ve identified six ways in which November in Augusta will mark a departure from what we know in April, according to people intimately familiar with the place.

Augusta National’s executive committee — aka “the green jackets” — have dominion over many things, but they can’t control the weather, which is cooler in November, according to National Weather Service data, with average high temperatures 8 degrees lower than they are in April. The wind is different, too. It prevails out of the north (the breezes at Augusta aren’t always “swirling,” despite what you might think from watching on TV), the most challenging direction, according to Tour veteran Jay Haas, who competed in 22 Masters and has played the course often in the fall as well. “It’s in your face right there on the 1st hole, and it’s usually a cool wind,” Haas says. “As if that hole weren’t difficult enough.” On the long par-4 11th, the fan blows right to left, pushing approaches toward the greenside pond. And it works against the players on both back-nine par-5s — crucially pivotal holes. “These guys all hit it so far these days, I’m sure they’ll still be able to get there in 2,” Haas says. “But at least they might be hitting longer irons in.”

They’ve got things so dialed in over there. I’m sure they can get that place playing almost any way they want. 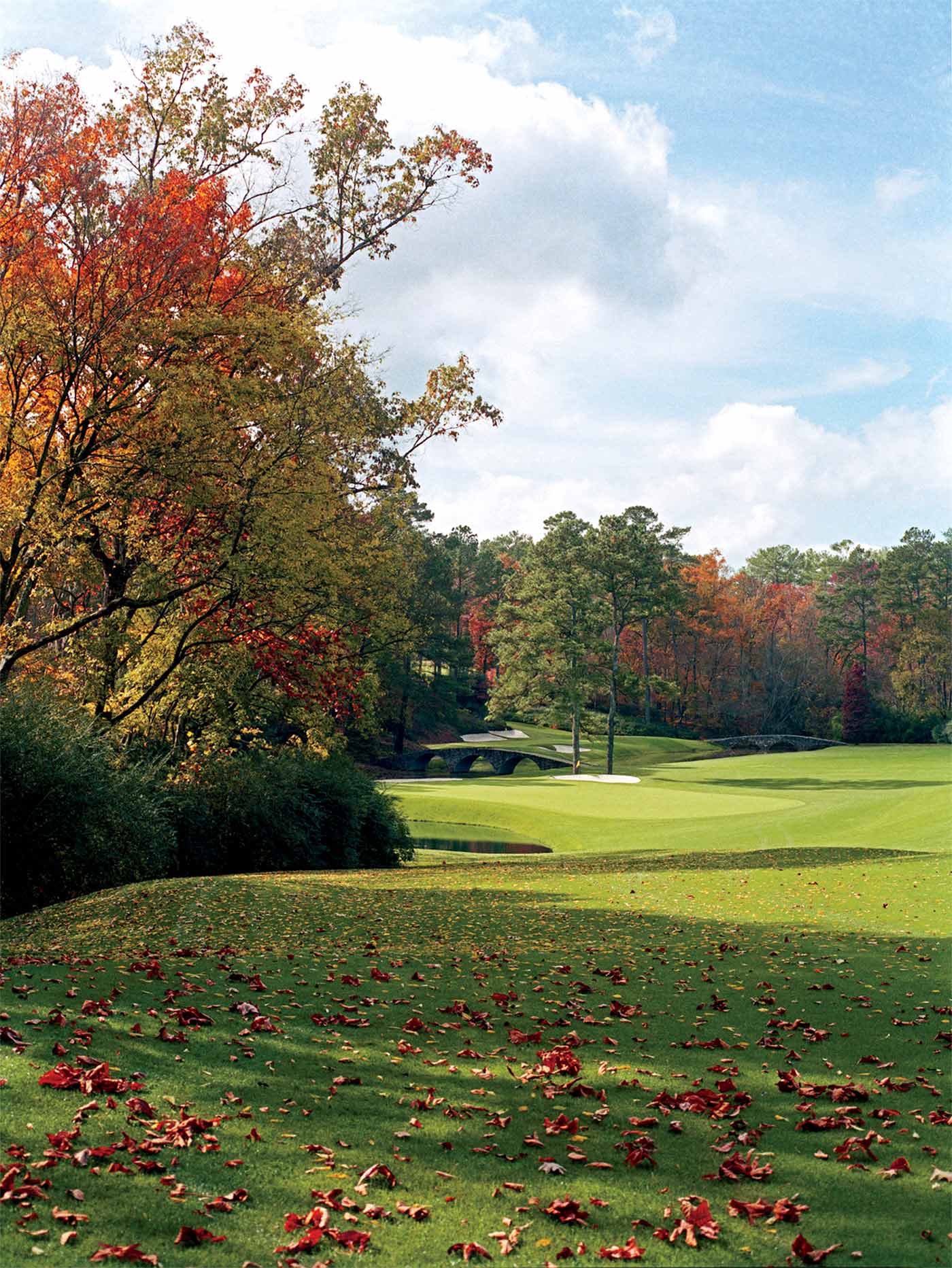 2. Fast, but maybe not as furious

Show up at Augusta National in the fall and you’ll find the fairways softer than they are in spring. Just as balls don’t fly as far in the cooler air, they don’t run as much after they land. Those softer conditions aren’t due to rainfall; average precipitation levels are the same in November as they are in April. The explanation? Agronomy.

Toward the end of September, Augusta does what many courses around the Southeast do: It overseeds the soon-to-be dormant bermuda in its fairways with perennial rye, the cool-season grass on which the tournament is traditionally played. That rye is lovely turf, but it needs a lot of water to take root. “For those first four or five weeks after over-seeding, it’s damp and wet and hairy and not great for golf,” says Rhett Baker, an Augusta native who is now the superintendent at Ohoopee Match Club, an exclusive course in Georgia. “To hold a tournament, you need to adjust.”

Because Augusta keeps its maintenance practices close to the vest, it’s hard to say exactly what the green jackets might do. But Baker says he wouldn’t be surprised if the club had bumped up its overseeding schedule by a few weeks to give itself more time to whip the fairways into shape. “They’ve got things so dialed in over there,” Baker says. “I’m sure they can get that place playing almost any way they want.” The fact that the tournament was pushed back to November, as opposed to October as originally rumored, suggests that the club is confident it can get the course in primo condition. This is the Masters. They don’t mess around. But it’s still fair to assume, given overseeding, that the fairways will be lusher than they usually are in April. A modest difference, maybe. But in a competition that calls for such precision, even minor changes can mean the world.

3. The sounds of silence

Quiet on the tee, and everywhere else. With no fans on the grounds, there will be no roars rippling through the trees. For Haas, that marks the most dramatic change of all. “They’re just such a huge part of the tournament,” he says. “I can barely wrap my head around not hearing them.” In their timbre and intensity, those roars are as revealing as any sounds in sport, and fans have come to recognize what each one represents: birdie, eagle, Sunday ace. It isn’t just the scores. You can often tell who made them.

“In my day, you always knew where Jack was on the course and where you stood in relation to him, because the roars for him were just different,” Haas says. “It’s not unlike what happens with Tiger Woods today.” Each gallery eruption functions as a tantalizing preview, sending electric jolts through the atmosphere and signaling changes in the standings before they even show up on the leaderboard. The tension thickens. The pressure builds. This year, though, the action will unfold to a stripped-down soundtrack of birdsong, whispers and soft piano music. “It’s going to be a huge adjustment,” Haas says. For viewers and competitors alike.

The final major of 2020 will also be the first major of 2021, which means we get two Masters in five months. In the interest of variety, a tournament known for its unwavering consistency might make a simple change that could have a profound impact down the stretch: It could modify its hole locations. Picture what we think of the Sunday pin on the par-3 16th hole tucked on the left between a fronting bunker and a backstop. That “traditional” position was not always tradition.

“If you look back to the early 1970s, that hole was more often back-right on Sunday,” says GOLF’s architecture editor Ran Morrissett. “Which brings a different set of challenges into play.” Similar alternatives exist throughout the course — on the par-4 3rd, for instance, where the hole could be cut on the far right on Sunday, as opposed to the customary left-side location, to tempt more players to try to drive the green. And on both back-nine par 5s, where the margin between eagle and something very ugly grows more frighteningly thin the closer the flags are to the creek. On the 18th hole, the front pin location of recent decades has yielded clinching birdies for the likes of Mark O’Meara and Phil Mickelson, among others, but the green jackets could always make “3” more elusive by placing the cup on the top tier in back, where it was when Jack Nicklaus won in 1986, sealing his victory with a testy two-putt.

“One of the hallmarks of great design is having a variety of great hole locations on your greens,” Morrissett says. Don’t be surprised if Augusta shows off a few new options in November, which will make the script feel fresh again in spring.”

At Augusta National Golf Club, there are fewer members than there are varieties of plants. Dogwood. Wisteria. Nandina. Holly. Some 350 types of trees, shrubs, flowers and grasses grow around the grounds of what was a fruit nursery until 1918. Given the botanical diversity, something is nearly always at its seasonal peak. Though the pink-blushing azaleas will be past their prime this year, the camellias will remain in bloom, and the course will still present a lively palette, with the pastel petals of jasmine and magnolias giving way to the autumnal reds and yellows of hardwoods changing hue. And if azaleas are really what Augusta wants, there is a varietal that blooms in autumn; the club could always bring those in, though that would be the sort of decorative touch that matters more to fans than it does to players.

“As pretty as those flowers are, I can tell you that late on a Sunday afternoon we’re not paying any attention to them,” Haas says. “We’re focused on that hanging lie in the fairway on 13 and what kind of shot we’re going to try to play to a pin tucked just beyond the creek.”

With SubAir Systems under all 18 greens, Augusta can be counted on to keep its putting surfaces running lickety-split. Pair those firm, fast greens with cooler temperatures and softer fairways and this year’s test might be as tough as the tournament can get.

“You’re hitting longer irons into greens that call for a steep angle of approach,” says GOLF Top 100 Teacher Jon Tattersall, who is based in Atlanta and has played Augusta numerous times. “That’s a challenging combination for almost anyone.” Thanks to the artistry of the design, and the fact that Augusta has no rough, the Masters will never be a basic-issue bomb-and-gauge affair. But perhaps more than ever, Tattersall says, this year’s event stands to favor big boppers. Length looms as a factor not only on such famously imposing par-4s as the 1st, 5th, 10th and 11th, but also on holes where players are apt to face awkward lies.

Take the 9th, Tattersall says, where drives “might not be running out to the bottom of the downslope,” or the 11th, where the speed slot in the fairway that leads to flatter ground likely won’t be as readily within reach. “The other scenario I could see is where it gets so long that everyone is missing greens.” In that case, Tattersall says, simply launching moon shots probably won’t be enough. Advantage will go to the “long-enough hitter with a deadly short game,” the bomber blessed with a surgeon’s touch.

Get ready for fall golf in our Pro Shop