The Masters green jacket do’s and don’ts, according to Bubba Watson 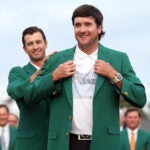 Bubba Watson, with help from Adam Scott, slides on his green jacket after winning the Masters in 2014.

Bubba Watson slid one arm in, then the other. The previous year’s champion, Charl Schwartzel, helped, as is the tradition. Watson gently tugged at the front of his green jacket with both hands.

Two years later, Watson slid one arm in, then the other. The previous year’s champion, Adam Scott, helped, as is the tradition. Watson gently tugged at the front of his green jacket with both hands.

In 2012, Watson’s trophy for winning the Masters fit like a golf glove. In 2014, his trophy fit again. Should he win a week from now, his trophy will likely fit a third time.

Over time, as these things tend to do, Watson’s dimensions might change.

His green jacket, apparently, will, too.

“Put it this way: Augusta is a very nice place,” Watson said recently on the Pat McAfee Show. “They have everything in a row; they have all their ducks in a row. So there might be a tailor on site that can help you fit.”

Other coat customs, according to Watson:

You have just one. Everyone does. Watson has won the Masters twice. Jack Nicklaus six times. Tiger Woods five times. They each have one green jacket.

“What happens is they give you the same jacket, so you only have one,” Watson said when asked if he received a second jacket for winning a second Masters.

You wear it at dinner at Augusta National.

“If I eat dinner there at the club, when I go to practice away from the tournament, I wear it; you’re supposed to wear it when you’re having dinner at the club,” Watson said. “But it stays in my locker. So when I get there, I put it on as fast as I can to make sure I still have it.”

You can take it home for just a year. Then it hangs in the Champions Locker Room.

“It stays on site; it stays in your locker,” Watson said. “And so you get to take it home for a year. And, kind of, you know, take it around for a year and just take it back.”

“He said, ‘Well, no one ever takes the jacket away from here,’” Player said at a Masters press conference last year.

Player said he and Roberts compromised.

“I put a plastic cover over it and never used it again until I came back,” Player said.