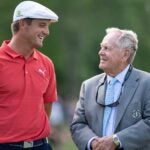 The new-and-improved Bryson DeChambeau has the potential to attack Augusta in a unique way.

When talk turns to an upcoming Masters, various lucky souls, reporters and Masters contestants most particularly, flock to the Golden Bear like swallows to Capistrano. Jack Nicklaus won six green coats, after all. He’s played hundreds of rounds at Augusta National. He knows a thing or two because he’s seen a thing or two.

My colleague Sean Zak and I made the trip a couple of weeks ago to see him, traveling from northern climes to the Nicklaus home in North Palm Beach, Fla. We saw Big Jack in his Game Room. Jack does not play video games. But he likes to hunt and fish and mount.

Things got exciting quickly, when our golf chat turned to Bryson DeChambeau, and Jack said something that practically caused Sean and me to fall out of our wingback chairs. That moment came when Jack said that DeChambeau could drive the 1st green at Augusta National.

Add some Bryson to your game in our Pro Shop Yes, Jack Nicklaus, a man not prone to hyperbole, said that DeChambeau, age 27 and the reigning U.S. Open champion who recently said that he flew a ball 400-plus yards in a practice session, could drive the uphill 455-yard par-4 1st hole at Augusta.

Here, slightly edited, is how that comment came about.

I said, “Jack, we’ve talked about what the conditions might be like in November and you said it can often play dry and fast. What kind of clubs could you imagine him hitting into the four par-5s if he hits good tee shots?”

Bryson is a brawny golfer and Jack is a brawny interview subject. He tells you what he knows and what he thinks. You can hear it all straight from the man’s mouth as part of a pre-Masters GOLF.com podcast, with your host Sean Zak.  Listen here:

Here are some of the other things Nicklaus said about DeChambeau, winner of Jack’s 2018 Memorial Tournament. (Nicklaus Companies, as you may know, is an affiliate of GOLF.com’s parent company, 8AM Golf.)

“I haven’t seen him in person hit a golf ball except on television at the U.S. Open, and of course at the Memorial tournament,” Nicklaus said. “He hit in some places I couldn’t believe. He was 27 yards from the 1st green at the Memorial tournament. I mean — come on. That hole is 470, something like that. If he could do that, he can drive the 1st green.

“And at 15 at Augusta, he’s got a wide fairway because he’ll hit it past the trees on the left. He’ll need a little pitching wedge into the 15th.”

There are four par-5s at Augusta National: the 2nd, the 8th, the 13th and the 15th. The 15th is 530 yards, with a pond in front of the green and more water over it. Tiger Woods made a two-putt birdie 4 there last year while Francisco Molinari, playing with Woods and still tied for the lead when they came to 15, made a 7. That was the ball game, pretty much.

It seems like ancient history, doesn’t it? But it was actually just last year’s Masters. Here’s how one reporter described Woods’s play on that last par-5, on the last day:

Tiger’s birdie on 15 was out of a textbook. Drive that went nearly 300 yards, uphill. A crunched 5-iron second shot, full and flowing, 240 yards of pure golfedness, with two yards of draw. He had caught the dead center of the clubface at impact and the heart of the green when it pitched. That’s how you play golf. The speed of the swing, his balance through it, the purity of the impact. It was breathtaking. That must sound like crazy talk if you’re not a golfer, but it might fill you with longing if you are. He two-putted from 45 feet. Some 4.

For Tiger at age 43, 15 was playing like a short par-5 last year. The 15th is the hole where Gene Sarazen made a fourth-round 2, with a 4-wood second shot, when he won the 1935 Masters. As Nicklaus was describing it, Bryson will be playing 15 as a short par-4 this year.

“What he has done is amazing,” Nicklaus said of DeChambeau. “He’s figured out that distance is far more important than accuracy. Even at a U.S. Open. And he took a chance by doing what he did to build himself to a level to be able to do that. I give the guy great kudos.

“You develop skills that give you an advantage and that’s what he’s figured out. And a lot of people will follow suit.”

Nicklaus, at Augusta in the 1960s, when he was in his 20s, was one of the longest players in the game. With a balata ball, steel-shafted clubs and a driver made of wood, he recalled playing 13 and 15 at Augusta National with a driver and second-shot 8-irons. Last year, Woods hit a second-shot 8-iron into 13 on Sunday, after a pulled tee shot during which his right foot slipped on the swing.

In the 1960s, when Nicklaus was in his 20s, he played in all 10 Masters tournaments. He had three wins and three other top-10 finishes. Youth is often served at the Masters, and length is often rewarded.

This will be DeChambeau’s fourth appearance in the Masters. His best finish was in 2016, when he was T21 and the low amateur. In the aftermath, in Butler Cabin and seated beside the tournament winner Danny Willett, DeChambeau told Jim Nantz that he’d be playing the following week, at Hilton Head, as a professional golfer for the first time. “I look forward to making a check,” DeChambeau said.

Most of the low ams at the Masters don’t come back and win the Masters eventually. But Jack did, six times. Tiger Woods did, five times. Phil Mickelson did, three times. Ben Crenshaw did, twice. Bryson DeChambeau is looking for a place on that list. Jack Nicklaus likes his chances.

What is the Masters and how did it start? A brief history of golf's most famous tournament

What is the Masters? And why is it so important?

How to watch the Masters on Sunday: TV schedule, streaming, tee times