Masters champ overhand-heaves club. But the bizarre was only starting. 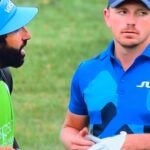 Charl Schwartzel heaves his iron on Thursday on the 15th hole at Innisbrook.

The tee shot? It was short. The club toss? It was long.

The iron from the fairway? Spot on.

The swing and throw came during Thursday’s first round of the Valspar Championship. One hole after a bogey at Innisbrook, three holes after a triple, and two seconds after knowing his tee shot on the par-3 15th would come up well short, Charl Schwartzel had hit his limit. After his follow-through, the 2011 Masters champ brought his 6-iron back around his head and flung it yards down the fairway.

“That was actually a better swing than the first one,” quipped analyst David Feherty.

Perhaps. After the heave, Schwartzel unfastened his glove, walked down the fairway, chipped on and two-putted for a bogey four.

“Uh well, don’t see that very often,” Koch said on the broadcast. “We see players slam clubs down, but actually heave them is rare.”

Only the bizarre wasn’t over.

On the next hole, the 446-yard, par-4 16th, Schwartzel no-bounce holed-out an iron from 194 yards out. His reaction here was more subdued.

“That’s more fun than throwing a club,” Hicks said on the broadcast.

“Uh, yeah,” Koch said. “The embarrassment from throwing a club a couple holes earlier probably led to his reaction.”

He finished with a five-over 76.