Masters 2021: Who is the favorite to win the Masters? 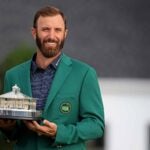 Dustin Johnson is the favorite at Augusta National once again.

Golf fans, rejoice! we’ve finally arrived at one of the most anticipated weeks of the year: Masters week! And lucky us, we get to experience the awe-inspiring beauty of Augusta National only five months after the last edition took place in November, when Dustin Johnson won his first green jacket and second career major.

The question on everyone’s mind now, of course, is who is going to win this week? And given the short span of time between this year’s Masters and the last playing of the tournament, it should come as no surprise who the current favorite is. Yes, you guessed it: current World No. 1 and defending champ, Dustin Johnson.

According to DraftKings.com, DJ leads the pack with odds of +950. But close behind is a duo of top players: Bryson DeChambeau and a peaking Jordan Spieth at +1150. Justin Thomas and Jon Rahm are next at +1250, and just behind them is Rory McIlroy, at +1900. A win at the Masters will complete the career grand slam for McIlroy, who has finished in the top 10 in six of his last seven starts at the Masters.

While McIlroy’s play at Augusta is certainly impressive, consider this: Johnson has finished in the top 10 in all five of his most recent starts at Augusta. And there is historical precedent for a Masters title defense: Jack Nicklaus, Nick Faldo and Tiger Woods all won back-to-back green jackets. Will DJ join that illustrious club? We can’t wait to find out.

How to bet on the Masters — risk-free!