Tour Confidential Daily: What’s been the biggest surprise at Augusta so far? 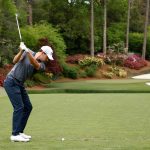 Patrick Cantlay hits his tee shot to the par-3 12th green at Augusta National on Thursday.

We are 36 holes through the 2021 Masters at Augusta National, and here’s what we know: Justin Rose leads, Jordan Spieth is only two back, some big names are going home and Si Woo Kim needs a new putter. What’s been the biggest surprise at Augusta so far?

Sean Zak, senior editor (@sean_zak): Uh, let me go with the obvious here: Justin Rose. The man was 100-to-1 to win this week because, yes, we had all really given up on him. That 65 on Thursday was a blackout moment, but his rally on the back nine Friday was indicative of his game being in really solid shape. I think he sticks around for a lot of the weekend.

Jessica Marksbury, multimedia editor (@Jess_Marksbury): I must admit, I’m very pleasantly surprised by Jordan Spieth. The hype for him has been astronomical this week, and it isn’t often that a player actually lives up to the lofty expectations we have for him. But, with 36 holes to play, Jordan appears to be the only player to do it.

Josh Sens, senior writer (@JoshSens): We knew that Rory wasn’t in peak form coming into this week, but if you told me that you had both McIlroy and Patrick Cantlay to miss the cut by sizable margins, I would suggest that you were fibbing. And now, as I type, down … goes … Frazier. I mean, DJ. No weekend for the defending champ?! Don’t tell me you predicted that either.

Zephyr Melton, assistant editor (@zephyrmelton): Rory McIlroy was downright awful this week, which was a tremendous surprise. Yes, he doesn’t have the best track record at Augusta in the early rounds, but he still managed six top 10s in his last seven starts. His inability to even sniff the cut line comes as a huge surprise to me (and I’m sure to Rory as well).

James Colgan, assistant editor (@jamescolgan26): At one point this afternoon, I looked up to see Bryson DeChambeau five over through five holes. Seven birdies in 13 holes later, he’s in the thick of things heading into the weekend. Maybe that hot streak was all he needed to make something happen this weekend.

Nick Piastowski, senior editor (@nickpia): All good answers above. I’ll add another name just to add to the conversation. Sungjae Im. He tied for second last year, was two under through eight holes — then played his final 28 holes at 13 over. (He shot 80 on Friday.) I feel bad for anyone who picked him to win before the tournament. (But check out that same person’s sleeper pick!)