Are you not entertained?! The 85th Masters is getting really, really good 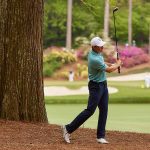 Jordan Spieth shot 68 on Friday and is two shots off the lead.

Let’s begin in the middle, after the seemingly endless preamble to this 85th Masters golf tournament. Let’s begin not with who do you like or what’s wrong with Rory or any of that. Let’s begin with the question that is at the very heart of every spring golf experience and this one most especially:

Are
you
having
fun
now?

Oh, we forgot something important, the dateline. Dateline: AUGUSTA, Ga.

Augusta, Georgia! There’s a pandemic going and we (all of us, in some fashion) are gathered in this Deep South city for this tournament that is being played, with limited commercial interruption, at its usual time and in its usual location.

Your leader at intermission, Justin Rose, shot a Friday 72, even par. He did the slow, 65-hangover leak thing on his way out (39), then did his this-is-my-nine recovery thing playing in (33). If 72 is Rose’s bad round, watch out. If 10 under wins (feels like a good number), Rose is 70 percent of the way there, with the hardest parts still to come. You know what they say: the Masters begins on Saturday afternoon, when Jim Nantz says, “Yo, yo, party people — what up!”

Let us introduce to you T2 No. 1 Willie Z, or William P. Zalatoris, as he was listed on his birth certificate, issued in San Francisco in 1996. Yes, Tiger won his first Masters eight months later.

Zalatoris is tall, lanky, blond, hollow-cheeked. Johnny Millerish, circa 1970, if you will, though Zalatoris came of age not in the Bay Area (as John did) but in greater Dallas (Trinity Christian, class of ‘14). When he cites Lanny (Wadkins), Tony (Romo) and Jordan (Spieth), he’s not first-name name-dropping. These are his people, people.

You may find this curious:

And Willie Z (as he was sometimes known at Wake Forest) won it in 2014.

T2 No. 2 (only because he is playing in Saturday’s second-to-last pairing) is Brian Harman, mid-30s (34), a husband and a father and a lefthander, who challenges Rory McIlroy for shortest winner on Tour (and aren’t they all winners?), a man who does not spend great sums on hair conditioner. (He grooms in the tradition of Scott V.P. of ESPN.)

There’s a term of the trade that covers this sort of error in judgment and maybe you know it: it’s called burying the lede.

But let’s get back to Masters rookie Will Zalatoris, who is carrying around Lanny’s course knowledge, Romo’s money (because Romo is good but he’s not that good) and his own Bay Area Italian restaurant recommendation.

Lanny, on playing Augusta’s par-3 12th, as Zalatoris described it after his Friday 68:

“I don’t even know if he remembers this or not, but Lanny just said that whenever it’s into the wind, when you get that kind of southwest-southeast wind, it just doesn’t really affect the ball much. And when it’s downwind, that’s where guys tend to struggle.

“Like I said, I don’t know if he even remembers [saying] that. But of course, me being a student of the game, I’ve known that for 10 years.”

“Tony Romo has been a great friend and a great sounding board. He’s basically been a big brother to me.”

As for his Italian restaurant, it’s called Ristorante Vivace, off the 101, about halfway between the Olympic Club and the Stanford golf course. It came up in his Friday night interview because he was describing the moment he locked into Masters golf. It was Sunday of the 2005 Masters. He was 8. He was not eating alone. A TV was on CBS. Tiger holed out an improbable pitch shot from over the 16th green. Three holes later — after a one-hole playoff — Woods won his fourth Masters title.

“Normally the restaurant was pretty quiet, and when that ball dropped it got pretty loud,” Zalatoris said. “It was just cool. That was probably when I realized how special the Masters is.”

But let us give Brian Harman the final word here, as he had his own Masters moment, when a fellow lefty, Phil Mickelson, won this celebrated tournament.

“I’m a golf fan, and I love watching golf, and all the majors have something special,” Harman said. “Growing up in Georgia, [someday] getting to play this place was always something in the back of my mind. You always want to do well at Augusta. Everyone I know, all my friends and family, are reaching out to me.

“But you have to realize that it’s one golf tournament amongst many more that I’m going to play. And that’s about the only way that I can probably calm down and play well this weekend.”

There is a lot of insight in those comments. The weekend at Augusta. How nice.

This is rhetorical: Are you having fun now?