What does a major champ pack for tournaments? Go inside Padraig Harrington’s ride 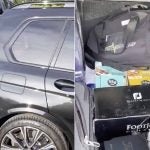 Padraig Harrington had a short drive to this week's event.

Padraig Harrington, even at age 49, is still a highly competitive golfer — T4 at the PGA Championship! — and will captain the European Ryder Cup team this fall at Whistling Straits in Wisconsin. He’s also a great Twitter follow, but if you follow him on Twitter you already know that.

This week, Harrington has a home game. The Irish Open started on Thursday, and since it’s at Mount Juliet Golf & Spa Hotel in Thomastown in County Kilkenny, he says the drive’s only about an hour for him.

Before he left for the tournament, he gave his Twitter family a behind-the-scenes look at what he was packing.

“When you got a home event and you are driving to it, you do tend to somewhat over-pack,” Harringston says. We’ll be the judge of that.

So, what’s in a major champ’s ride?

For starters, golf clubs. You need those. Then the obligatory items like suitcases and travel bags, shoes, compression soles, golf balls and collared shirts. What else? Harrington, always one to tinker, said he has some recovery devices, and he also brought a whole bag of other goodies. His wife even threw in some baked goods. There’s more, too, which you can check out in the video below. One thing he didn’t bring, though? Wilson.

“Poor Wilson doesn’t get to go,” Harrington said. “He’s a little bit disappointed about all of that. He’s trying to get into the back of the car. Unfortunately no dogs allowed, otherwise I’d be bringing him. And that’s about it. Hopefully I hadn’t forgotten anything, but we’ll wait and see.”