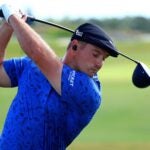 Bryson DeChambeau finished second on the the PGA Tour in ball speed during the 2021 season.

The 130-ish-mph swing speed version of Bryson DeChambeau has been around for about 15 months now, and he’s had a lot of people talking.

His body won’t hold up.

He’s not the ball-striker he once was.

Surely you’ve heard the chatter, but it has all revolved around one man in one moment in time. Bryson, in the here and now. But what about the future? Will DeChambeau’s power game have the same impact on his sport as, say, Stephen Curry’s three-point accuracy has had on the NBA? One future Hall of Fame golfer thinks so.

The ultimate tinkerer, Padraig Harrington, has spent enough time on Instagram to notice there are plenty of youthful, free-swinging DeChambeau disciples (DeChiples?) working their way up the ranks. He discussed as much with Michael Breed on SiriusXM PGA Tour Radio this week:

“The Holy Grail for any golfer is to be able to walk up on the tee and only worry about their game for the week, not worried how anyone else is playing,” Harrington said. “If [DeChambeau] does play his best, he really does have an advantage.

“What is interesting is that’s gonna be a dime a dozen in 10 year’s time. If you go on your social media, there’s kids 16, 17 years of age who are cruising at 200 mph ball speed. Eventually, some of them — there’s gonna be 10 of them, 20 of them, 30 of them on Tour in 15 year’s time, 10 year’s time. Some of them are going to be really good players. Not just being able to hit the golf ball. It’s tough to beat one Bryson DeChambeau, but it’s really tough to beat 30 of them if you’re not one of them.”

How bold is it, predicting swing speeds to increase to that level across the top players in the game? Not very. That trend has slowly been happening. What is bold is to suggest that there are many 16-year-olds “cruising” at 200 mph ball speed. That’s a number that DeChambeau hopes he can hit in the future consistently during competition. He currently has to work his body up to reach those numbers.

When Tony Finau, one of the longest players in the game, decided he’d chase speed video last year, he tapped out at 206 mph. That’s a world-class golfer in his prime chasing after it. There’s no cruising going on. So, perhaps a big of an exaggeration from Harrington there, but his point remains: The game is filling up with ball-speed chasers, and even more distance is coming.