Who is Will Zalatoris, and how is he tied for 2nd at the Masters? Ask Zalatoris 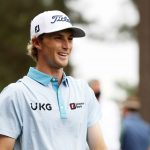 In his first Masters, Will Zalatoris has looked right at home.

Zalatoris played on Saturday with a future Hall of Famer, Justin Rose. He started at 2:20 p.m. in relatively still conditions. He watched the pines start to shake as wind and humidity came in. He waited out a rain delay after a poor second shot that left him in a greenside bunker on 7. He finished, playing the last shot of the day, under the purplish sky of dusk. He shot a Saturday 71 with a decidedly ordinary round of putting. He’s in a four-way tie for second, four shots back of the leader, Hideki Matsuyama.

The chances of Zalatoris winning on Sunday are slim, though possible. The chances of him contending on tough courses for years to come are excellent.

That’s because he drives it long and in play and hits approach shots hole-high with a short backswing and a long follow-through. (Impressive!) He uses a long putter and he runs up his left arm a la Matt Kuchar. (Eh.) He carried himself on Saturday as if he’s playing in his 10th Masters. It’s his first.

An early tell came on the 3rd tee. The 3rd is a short par-4, 350 yards. Rose had the honor and hit an iron, a conservative and common play. Zalatoris hit driver. That meant waiting for Brian Harman and Marc Leishman to clear the green. And that meant making Rose wait. Yes, these things come with the territory. But Zalatoris looked like he owned the tee. He had nothing to apologize for and didn’t. He striped it, pitched it beautifully, made a 3. It was, by far, his best pitch of the day and his best putt. It got him to seven under and that’s where he was after 54 holes.

By way of background, Zalatoris is a country-club kid — private high school near Dallas, three years at Wake — with an intense manner on the course and an easy smile off it. His father was a member of the tony California Golf Club, in San Francisco, where Zalatoris spent his early years, until the family moved to Dallas, where his father worked in the mall-development business. It was in Dallas that he became a junior world-beater. Jordan Spieth, three years older, was one of his heroes. Yes, it’s come to that.

What experience will you lean on Sunday, he was asked.

We love shiny and new. Everything is in front of him. You’re drawn to him because his love of the game is so obvious.

The last player to win the Masters in his first visit was Fuzzy Zoeller. Fuzz won on Sunday, April 15, 1979, in a three-hole playoff. Frank Urban Zoeller, noted gourmand, has been a fixture at Tbonz, the Washington Road steakhouse here, pretty much since. Willie Z is a foodie, too. Put him in front of a dim sum cart in San Francisco and he’s a happy man.

And then there’s the Masters leaderboard, which he’s been on all weekend. Also a good spot.