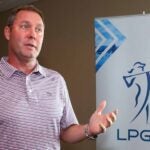 LPGA Commissioner Mike Whan announced he was stepping down from his post Wednesday.

Oddly enough, the chaos presented by 2020 provided a clear message to at least one leader: LPGA commissioner Mike Whan. And what did that message say? After 11 years, it was finally time to step down.

“If I’m honest with you, watching us work through the pandemic of 2020 was the visualization I needed to know that it was not only time, but it was right,” Whan said in a press conference Wednesday. “In 2020 I got to watch more than do more, and there’s an incredible pride that comes with that. As I think I’ve told people before, at 40 years old I probably would have been offended how good the team ran without me. At 55 I was really both blessed and honored.”

Whan leaves behind a legacy as one of the sports world’s most forward-facing executives — a role that hasn’t always come easily. The 56-year-old presented a dynamic vision and message for women’s golf with uniformity for more than a decade, critics be damned. In doing so, he grew to near-universal respect in the sport, even among those who didn’t always agree with his decisions.

In an era in which many sports leaders are defined by corporate-speak, the commissioner built a reputation for being personable, accessible and transparent. So, as he prepares to move away from his role, does he have any advice for the Roger Goodell’s and Adam Silver’s of the world?

“I don’t know that other commissioners in other sports would care what my advice is,” Whan said. “But I think if you can treat your members like they’re the owners — I know you can’t always do that, but I think sometimes it gets easy to think about them working for you and not the other way around.”

Whan says his primary job at the LPGA isn’t making money or growing the sport, it’s culture. Too often, he says, bad outcomes are borne from those who focus first on profit and second on culture.

“I have a personal philosophy that you never delegate bad news,” he said. “So if somebody writes a nasty email or letter to the LPGA or says something on their website, our team knows it has to go to Mike Whan before it goes to anybody else. I find way too many leaders, not just commissioners, but leaders, try to insulate themselves so the bad stuff has to get handled by somebody else.”

“I think if you’re aware of the bad stuff, it doesn’t stay bad stuff very long,” he said. “My father used to say, ‘It’s okay to have problems, it’s just not okay to have the same problems next month that you had this month.’ It’s is one of the ways I kind of avoid that.”

Sometimes, Whan says, a culture of accountability manifests itself in simple ways.

“Be honest even when it hurts,” he said. “It’s a hard job to stay honest in, and I don’t mean that because you’re sly. I just mean you’re sitting on a lot of knowledge of things that are coming out eight months from now or two years from now, and sometimes you can ruin the whole deal by talking about it ahead of time.”

During his time at the LPGA, Wahn helped bring women’s golf to the Olympics, he pushed hard for growth in the youth game, and he was instrumental in expanding the sport’s television opportunities. By nearly every measure, the game is in a better place today than when he assumed his post in 2010.

So, what advice would he give the rest of the sports world on replicating his success?

“Most importantly I would say to any commissioner, remember who’s writing your check,” Wahn said. “My guess is it isn’t just the owners of your league, it isn’t just TV contracts, and it probably in a lot of cases isn’t just fans. I find it’s pretty easy to get away from the fact that the real revenue you’re generating has got to be important to you and you’ve got to prove that to the people that are sending those checks, otherwise the checks stop.”