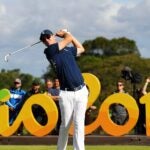 The first golf tournament at the Olympics was individual stroke play, though retiring IGF President Peter Dawson would like to see that change.

Olympic golf remains a work in progress following its grand reintroduction in Rio de Janeiro — that much is certain.

Four-and-a-half years after the sport returned to Olympic play, questions remain about its format (an individual, stroke play tournament), its ability to attract top-tier talent, its value to golf and its long-term viability as part of the Games. But Olympic golf, however flawed, will continue on in Tokyo in 2021 thanks in no small part to the work of Peter Dawson.

The International Golf Federation president is retiring at the end of 2020 after a 10-year run at the helm of the sport’s international governing body, a stretch that included overseeing golf’s return to the Olympics for the first time in more than a century in 2016.

And now in his waning days atop the IGF, he’s answering questions for the first time about golf’s circuitous path back to Olympic glory.

In an interview with “insidethegames,” Dawson touched on all aspects Olympic golf, including the question most on the minds of golf fans: why the sport opted not to pursue a Ryder Cup-style team format.

“[The International Olympic Committee] wanted the format in the Olympic Games that was prevalent in the sport, not some fancy format for the Olympics,” Dawson said. “And stroke play is the way that golf largely determines its major champions.”

In Dawson’s telling to “insidethegames,” the IOC wanted Olympic golf to be representative of the overwhelming majority of the sport’s events. In other words, the IOC wanted one thing: stroke play.

Even the idea of a gross team play competition (in which players would add together scores from stroke play rounds to form a ‘team’ score) was left off the table.

“They also made it clear, and this is maybe a subject of ongoing discussion, that they don’t want team sports that are simply the addition of individual performances,” Dawson said. “For example, football is a team sport, where everyone interacts. It’s not just the addition of performances, although some sports in the Olympics are still like that and have been for a while.

The Olympic Committee’s objections weren’t the only issues in implementing a team format. Equally difficult was negotiating a schedule gap to allow for Olympic competition with each of the major professional tours.

Even if the IGF managed to secure approval for a second team-based event (mirroring events like swimming, track-and-field and gymnastics), getting the professional tours to agree to a two-week work stoppage was unlikely.

“We didn’t have the option in the bidding process of putting a team format together,” Dawson said. “And Tours didn’t want to stop play for two weeks for the Olympics, they wanted to stop for one week. So there wasn’t time for a separate team event.”

But Dawson remains optimistic about adding a team-based component to the Games, perhaps even using the format the Olympic Committee rejected in the early 2010s.

“It would simply be the addition of the performances of the individuals, adding together their gross scores,” he said. “There have been other formats where that has been done – at the Canada Cup and the World Golf Championships. So it’s not by any means new to golf.”

Dawson is hopeful he laid the groundwork not just for the future of golf in the Olympics, but for a team competition he feels the sport deserves.

“A personal view is that I would like to see that add to the competitive landscape of the Games – but that’s a matter for others now. I’m sure those discussions will go forward.”